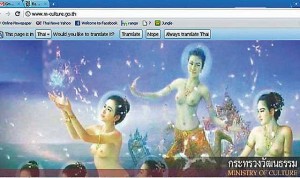 A painting of topless women displayed on the Thai Culture Ministry’s website.

It was Songkran. Three Thai teenage girls – 13, 14 and 16 – danced topless at the Silom-Narathiwat intersection area one night last week.

The Bang Rak district chief Surakiat Limcharoen filed a complaint against them as well as anyone releasing video clips of the trio’s “performance” on the internet.

They were fined 500 baht each on obscenity charges.

The three are no innocent virgins, they had been to “an entertainment place that has naked shows in exchange for the price of admission and drinks: where if one went bottomless, they could win a complimentary bottle of whiskey.”

Anybody who has distributed video footage of their topless dance over the internet will also face charges, Monchai Sriprasert was quick to remind everyone.

In addition, police spokesman Prawut Thavornsiri said those who cheered the girls on and urged them to take off their clothes should be considered supporters of the crime, although they will not be prosecuted.

Because they are frigging hypocrites that’s why!

Silom is not that far from Patpong, an area in Surakiat Limcharoen’s district famous – or should I say “infamous”? – worldwide for its sleazy sex industry where young, topless “ago-ago girls” gyrate to loud music, clad only in pussy floss, er, I mean G-strings, the same girls who – for a “bar fine” will go back to your hotel room with you where you can have your way with them.

Some parts of Thailand are populated by criminals taking refuge, crooks and murderers who can never ever return to their own countries because they are fugitives on the run.

At any time in Phuket, Koh Samui and Pattaya you can see aging pedophiles from all over the world brazenly walking the streets while holding hands with prepubescent children of either sex.

Trannies are all over Thailand – contests for the best-looking transvestites (“ladyboys” as they are called in Thailand) are held all over the kingdom and tourists pay for “cabaret shows” put up by them.

What a fantastic Buddhist country, isn’t it?

And those three teenagers who took off their tops amidst the frenzy of Songkran festivities –  you treat them like they’ve committed lèse majesté?

Oh don’t get me wrong – I’m not saying it’s ok to strip naked and dance at street corners, but treating those three teenagers like criminals?

How about jailing the Thai Minister of Culture? The Ministry’s website features nude women you know?

And what about ancient Thai paintings showing nude women?

Someone should be thrown in jail for those too, right?

Thailand wins pants down for being the world’s most hypocritical country, in my humble opinion.

Those authorities who launched those campaigns are talking through their asses, if you ask me. 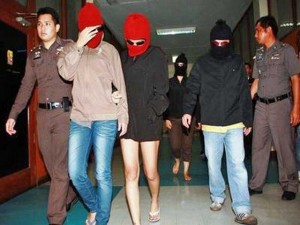 To really shame them, the stupid Thai authorities should have unmasked them.