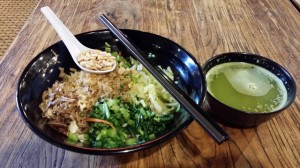 You either hate it or love it – the Hakka dish “Thunder Tea Rice.”

Said to originate from General Zhang Fei’s time when a herbalist concocted a mixture of tea, basil and herbs to go with rice to cure the General’s soldiers who were down from an epidemic. That’s the glamorized version. I suspect the truth is that in ancient times, those poor Hakka buggers – who were wondering nomads (“Hakka” literally means “guest people” with no fixed homes) – couldn’t find any meat to eat, so they just chopped up all the vegetables they could forage, dumped them into rice and poured in tea and voilà, a dish was invented. In Hakka it is called Lei Cha rice. “Lei” meaning “to grind” or to render all the ingredients into small little edible bits and the herbs that get ground into a paste that goes into the potion. “Lei” also sounds like “thunder” and “Cha” is “tea” hence the name “Thunder Tea Rice.”

Today a green-tea-based concoction is poured into a bowl of rice filled with tiny cubes of bean curd, dried shrimps, pickled radishes, finely-chopped long beans, peanuts and God knows what else.

It looks simple but takes hours to prepare because so many ingredients are needed. If you opt for brown rice, the faint nutty aroma of the rice plus all those stuff you’ll end up chewing makes the dish a very interesting experience for the person who eats it. It gives the jaws a good workout and has a nice “mouth-feel” to it and since no meat is involved, it’s a guilt-free treat.

I overhead two ladies at Food Republic talking about this one-dish meal. One obviously loves it and had just introduced her friend to it. Her friend, tasting it for the first time, was actually somewhat offended that she was being treated to such a simple meal that tasted so weird. “This rubbish must be like food they dish out to prisoners, or something they throw to stray dogs!” she harrumphed in disgust.

It reminded me of that time when I served 25-year-old Macallan single malt to a Neanderthal only to have that human train wreck complain that it “tastes like cockroach.”

Well, I don’t know about that. I have never eaten a cockroach before.

Often the difference between what is sublime and what is crass is a thin line, like the line between genius and insanity.

The naked girl gyrating on stage in some sleazy third-world lap dance bar or strip club is not the same as the nude in Le déjeuner sur l’herbe but I don’t expect Neanderthals to know that.

Sometimes, things that appear simple are not that simple after all.