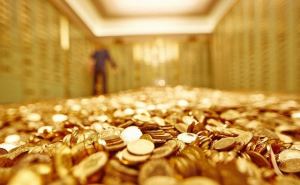 About this time last year, there was a story going around claiming that Samsung paid Apple US$1 billion worth of damages in a lawsuit using 5-cent coins transported by 30 trucks. The story even quoted Samsung Chairman Lee Kun-hee saying that the payment mode chosen by the company is the Korean way of showing Apple that Samsung could also play it nasty. Of course it wasn’t a true story.

Lately, however, paying with coins has been very much in the news.

A daylight robber posing as a mobile phone seller dumped a thousand bucks in coins when ordered to refund a customer. When told to make payment to a car company, one retard dumped 19,000 dollars’ worth of coins from a box used to contain fish onto the carpeted floor of the car showroom.

I have also being a “victim” of a somewhat similar incident.

Back when I was in primary school, a classmate by the name of Yong Thong Fook owed me 10 bucks. I can no longer remember the circumstances that led to that and today I bear no ill-will toward Mr Yong. In fact, I’m hoping to bump into him one day to have a chat and catch up over a cup of kopi. Anyway, Yong took a bit of time to repay me and even then I harbored no ill-will toward him but ten bucks was ten bucks so I kept pestering him relentlessly. Maybe because at that time, 10 bucks meant a lot to a 10-year-old boy like me, so I nagged and nagged him every day. Eventually he threw a 50-dollar note at me. Of course I didn’t have change and with that, he displayed a smirk on his face, retrieved the 50-dollar note and then proceeded to throw me a 10-dollar note instead. (Thank God, he didn’t throw ten bucks in one-cent coins at me!) I’m sure Yong felt a sense of triumph doing that to me. As for me, I was glad to get my money back, but I felt utterly humiliated.

I am no psychoanalyst, but I suspect the whole point of throwing money in people’s faces or dumping coins at them is first triggered by internal anger, and then next, by a desire to humiliate the person you owe money to. “You want your money back? Sure, here it is, take it you fucker, come get it!” and then throw the lot at him and use tons of coins and enjoy seeing the poor fella crawl all over the floor like a dog to pick up every bit of what is rightfully his.

Of course having a motive for behaving like a thug is no excuse for pus bags like Jover Chew of Mobile Air to justify his actions. (In addition to along list of infractions, including the coin dumping incident, making his store infamous for having chalked up the most number of consumer complaints, 25 in three months to be exact, Chew left a Vietnamese tourist in tears and kneeling on his knees begging for a refund after being charged an obscene sum of money for “warranty.”) Enough has been written about this and unless you were hibernating in a cave last week, you would know all the sordid details by now, so I won’t add to the cacophony. I just want to share that out of the whole episode, one stark truth struck me: That our government is audacious enough to incur the wrath – not to mention, ridicule – of many by banning chewing gum – and now shisha – to “protect” the population, the long arm of its laws are impotent to protect tourists who shop here, thereby reducing Singapore further as a laughing stock for not being able to prevent thugs, goons and crooks from hiding behind seemingly legitimate stores like those operated by Jover Chew.

And the saddest part of this whole thing is that con men like Jover Chew may get the last laugh, because while one aspect of our laws is impotent to protect those cheated by the likes of him, the other part of our law – that part that deals with harassment – can get into trouble all those internet vigilantes who have been playing pranks on Chew.

Yup, we are so screwed up.