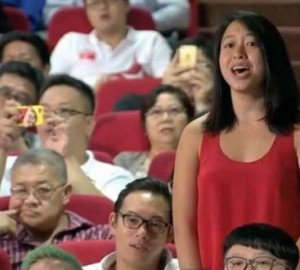 During Sunday’s National Day Rally, as Kit Chan was belting out the song Home, 26-year-old Wu Jiezhen stood up, because she was “swept up in the moment.”

I may be old-fashioned but I suspect this is symptomatic of the narcissistic and self-centered “Look at me! Look at me!” generation who thrives on being social media whores, the generation who derives their highs by accumulating as many Facebook likes as possible.

Where is the respect? The prime minister was about to deliver the speech of the year, the equivalent of a State of the Union address. The entire cabinet was there, so were special guests, VIPs and foreign dignitaries. Given the solemn nature of the occasion, was this appropriate behavior? Sure, express your patriotism and love for Singapore blah, blah, blah, but there’s a right place for the right thing. Sure, follow your heart, but please don’t leave your brains behind. Call me an antediluvian fuddy-duddy, but my dear Miss Wu, what makes you think you can do anything you like, as and when you feel like it? This place will be an absolute chaos if everyone thinks he or she can just be spontaneous and do anything that catches his or her whim or fancy when they are “swept up in the moment.” No sense of propriety here, is there? And if there’s one thing that your generation needs, it’s not grandstanding, it’s a sense of propriety.

What’s more, by standing up, you callously blocked those seated behind you. You didn’t care about that, did you?

Wu explained her behavior to The Straits Times by saying “Home is one of my favorite songs because its lyrics resonate so dearly with me. I know Majulah Singapura is the national anthem and the reminder of what our forefathers went through to build the nation, but Kit’s song really is the anthem of my generation.”

Drawing parallels to how the late Lee Kuan Yew must have similarly “stood alone” at times when he struggled with building the nation, Wu insisted that young people in Singapore must not fear “being different” and must take ownership of the vision of Singapore that they want to see in the future.

Wow so she’s a wannabe Lee Kuan Yew or what? What audacity! Comparing herself sticking out like a sore thumb to Mr Lee. And since when did Lee Kuan Yew stood alone? He had everyone he needed with him – good men and women of his generation handpicked to roll up their sleeves and to work and labor hard. (They certainly toiled more than they sang, that’s for sure.)

Almost as an afterthought, Wu also said “I would like to apologize to those behind me for blocking their view when I stood up, but sometimes I feel we should not be unapologetic when we’re standing up for something that we believe strongly in.”

Call that a half-ass apology, if there’s one.

I, me, myself and to hell with everybody else, huh?

What else is new?

It’s so easy for people to rationalize away their behavior and find justification for their actions.

Doesn’t say much for a Wellesley graduate, does it?

She also reminded The Straits Times that “It is people like us who will be responsible for how the next 50 years will look like for our country.”

That thought almost makes me brown my boxers.