Donald Trumpet is Who We Need to Fight the Haze 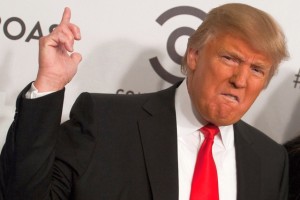 We assume that Donald Trump won’t go far in his campaign for US presidency – well, Trump, the boorish demagogue, surprised everyone by being the leading candidate among the Republicans.

Because he has titanium balls, that’s why.

He is one son of a bitch who doesn’t hold back, he says what’s on his mind, straight from the shoulder.

To hell with political correctness.

He calls Mexicans rapists and Carly Fiorina ugly. He claims that Megyn Kelly “had blood coming out of her wherever.”

And he thinks McCain is no hero because he got captured by the Vietcongs.

He also said if Hillary Clinton couldn’t satisfy her husband, how could she satisfy Americans.

Donald Trump verbalizes and vocalizes what many have no guts to say.

And nobody can hold him ransom. He is his own man. He owes you nothing. He doesn’t need your money. He can never get fired because he has no boss. He is his own boss. He’s not obligated to lick your balls.

Ever since I had hair, we have been plagued with haze from our friendly neighbor, Indonesia.

Despite all the brains and loudmouths in our government expressing concern (yeah, any retard can express concern) and offering help – yup, offering help, what a joke! – have we been able to get the Indonesians to manage the haze problem?

Has it ever occurred to you that the haze problem is one foisted on us by the jokers we elected to government?

The very same jokers who advised us to be “psychologically prepared” for the haze?

Yes, we have been psychologically prepared for years now – since 1972 to be exact – but what have you done to stop the haze?

Let’s face the truth, and the truth is that we don’t have the testicles to tell the Indonesians to eliminate the haze problem.

In other words, we are screwed.

So better suck it up.

Get used to it.

We are after all, according to a hermaphrodite cock-sucking bastard chimpanzee named BJ Habibie, only a tiny red dot. (Yeah, guess who’ll name their kid “BJ” huh? His unmarried parents must either be gifted with the ability to prophesize or were prescient.)

Who in the world are we, right?

In 1972, he expelled all Asians from Uganda.

Can we ask Indonesians or anyone of Indonesian descent to leave Singapore?

Do that, and I guarantee you, the haze will stop immediately.

But can we do that?

We don’t even have the scrotum to summon the Indonesian ambassador for an official reprimand.

Can we sit down with them and talk sense?

It’s extremely difficult reasoning with buffoons and donkeys; difficult to go to battle with un-armed morons. They won’t understand.

I’m not saying we are, but if we are a hub for dictators to park their money and for neighboring crooks to launder their stolen cash here, then we have lost the moral authority to confront them. If we make Singapore a safe haven for kleptocrats and criminals we essentially put the kibosh on any real solution to the haze problem. By the same token, if ASEAN member countries would rather go to bed with each other than sit down and deal with the real issues, then the haze problem is not ever going to blow over.

Ok, so I exaggerate. Or rather, under-exaggerate.

But anyway, stock up on those masks, and shut the hell up.

And consider thanking our friendly Indonesian neighbors for the eleven months of oxygen they supply annually free of charge to us losers. (That’s what their vice president Jusuf Kalla, another Neanderthal stills stuck in the trees, told us to do.)

Donald Trump would carpet bomb that pigsty called Indonesia off the surface of the earth.

But we Singaporeans are a civil lot.

Oh, we wouldn’t dream of doing that would we?