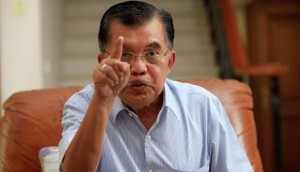 It will be offensive to call Jusuf Kalla a pig, but surely it is acceptable to call a pig Jusuf Kalla?

The haze is here to stay. Since 1972 it has been an annual affair. And for the first time ever, schools had to be shut down.

Are the Indonesians apologetic?

Singapore should help solve the haze issue, not just talk about it, said Indonesian vice president Jusuf Kalla when he attended a meeting at the UN recently.

“Singapore, come if you want to help. Don’t just talk,” he said.

Obviously Kalla sees the haze as yet another opportunity to perfect his stand-up comedy act.

He has also said that we should be thankful for the oxygen provided by Indonesian forests for the rest of the year and quit complaining about the one month of haze.

I normally won’t dignify such asinine comments with a response but this boorish retard had made similar remarks between 2005 and 2007 when he was vice president to then President Susilo. His crass, vulgar and moronic statements deserve some reciprocity.

Singapore Foreign and Law Minister K Shanmugam, in a Facebook post last Thursday night, expressed his unhappiness at what he referred to as “shocking statements made, at senior levels, from Indonesia, with a complete disregard for our people, and their own.”

“How is it possible,” asked Shanmugam, “for senior people in government to issue such statements, without any regard for their people, or ours, and without any embarrassment, or sense of responsibility?”

(For the record, Singapore’s offers of help have been rejected repeatedly by Indonesia.)

Dear Mr Naive, er I mean, Mr Shanmugam, you ain’t seen nothing yet.

Didn’t you realize that, Mr Shanmugam?

They can even fly high enough to be vice presidents of banana republics.

I bet, when Jusuf Kalla was there, they needed translators at the UN to interpret pig grunts into understandable human language.

Pigs are deuterostomes, which means when they were developed in the womb, the anus forms before any other bodily orifices. Essentially, they started off as assholes. Some pigs like Kalla obviously never progressed beyond that stage. This probably explains why he’s talking through his ass most of the time.

At about the same time when Kalla was spewing unmitigated porcine feces from one of his rotting bodily holes, Indonesian Presidential Chief of Staff Teten Masduki reminded us that Singapore should remember we have enjoyed his country’s forest products and oxygen supply for nine months this year before encountering the haze.

Looks like there is no shortage of brainless pigs and fetid pus bags like Kalla and Masduki in Indonesia. They are nothing but excrement generators of epic proportion. These cretins should just kill themselves (by pumping their very own pure, original, native, patented Indonesian haze directly into their lungs) to make planet earth a better place for the rest of us.

God have mercy on these two if I have my way.

Put it this way: if I host a banquet, these two will not be at the table, because they will be on the menu.

Have they forgotten that when Aceh was wiped out by a killer tsunami on Boxing Day, 2004, 1,500 men and women from Singapore were there almost immediately to help stabilize the mayhem in Aceh? They were accompanied by three supply ships, 12 helicopters and eight transport aircraft from Singapore.

And now when we express concern about the haze, these ingrates blow smoke in our faces.