Tasty Stinkweeds from the Land of the Romans 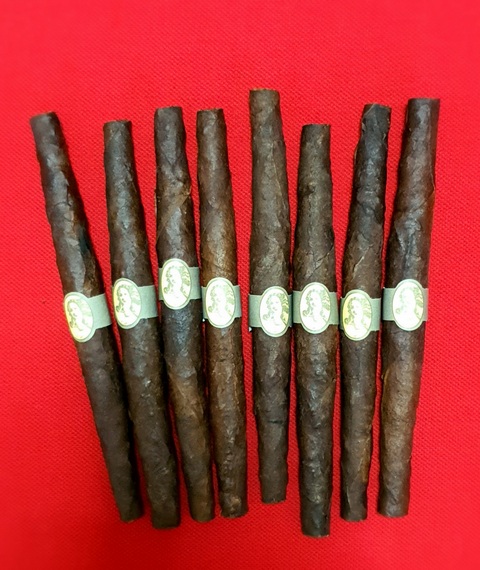 Client Eastwood smoked them in the spaghetti westerns he acted in. Peter Falk smoked them in Columbo. James Stewart smoked them in Anatomy of a Murder, calling them “Italian cigars” and when he offered some to his co-star Arthur O’Connell, O’Connell declined saying “Those stinkweeds are another sign of your decadence.”

The cigars in question are the Toscano cigars from Italy, and though priced very cheaply, they are definitely a decadent treat at times like this when all non-essential businesses are not permitted to operate and tough luck if you run out of cigars, not that these are easily available in Singapore anyway. (Rumor has it that a self-styled “tobacconist” in Singapore allegedly pilfered some free trade samples some time ago, and sold them for a handsome profit, much to the ire of Manifatture Sigaro Toscano SpA, the makers of these cigars. But that’s another story for another time. Hint and a foretaste of heaven divine: with this scumbag, there can be no end to stories.)

I enjoy these rough-looking cigars (typically, the Toscano cigar has an uneven, sometimes lumpy, surface, with noticeable ribs of the tobacco leaves) and often cut them in halves, amezzatto, to be savored at two different times, the way many Italians do. They are not typical cigars as the Kentucky tobacco used in making them are generally reserved for making pipe tobacco, which suits a pipe smoker like me, just fine. You must have the constitution of a bull – or you must be a bullshitter – if you can finish an entire stick (intero) in one sitting. I did that once, smoking a whole Toscano stogy with my morning coffee and on an empty stomach at an outdoor café, (back in those good old days when twitter was a sound and cloud was something in the sky, and smoking along Orchard Road hasn’t been banned by the Nazis in the government yet), and had to beg someone to drive me home after that. (Most Toscano cigars are between the length of 150 to 160 mm or 5.9 to 6.3 inches and have a typical elliptical or “perfecto” shape. They are tasty smokes, but strong and intense, with a high nicotine content, perfect after a curry meal, or a meal of steaks or heavily-spiced barbequed meat and with a doppio espresso on the side. Definitely not a morning smoke on an empty stomach! Note that nicotine has a latent effect; you might not realize how strong your cigar is until you’ve already consumed a good portion of it.)

How did these wonderful smokes come into being?

The story, according to those greasy Italians (the very same ones who told me about our self-styled “tobacconist”) began in 1818, in a tobacco factory in Florence founded by the Grand Duke of Tuscany, Ferdinand III. A bale of Kentucky tobacco leaves that had been drying in the open were caught in an unexpected downpour of rain. The wet tobacco started to ferment in the summer heat. It was decided that, instead of throwing them away, the fermented tobacco should be used to produce some cigars, to be sold off cheaply and – voilà – the rest, they say, is history.

Today, Toscano cigars are manufactured by Manifatture Sigaro Toscano SpA located in Lucca and Cava de’ Tirreni, and are still sold cheaply. The same manufacturing method discovered accidentally is still being used: tobacco leaves first undergo wet fermentation for a period of time, and then flame-cured in ovens fueled by oak and beech woods for a total of 15 to 20 days.

After rolling, the cigars are air-dried in an aging chamber. They are then packaged and sold.

There are nearly 30 different varieties of Toscano cigars, including pre-cut, flavored versions. They are easily available throughout Europe. Those pictured in today’s post were procured in Cologne. 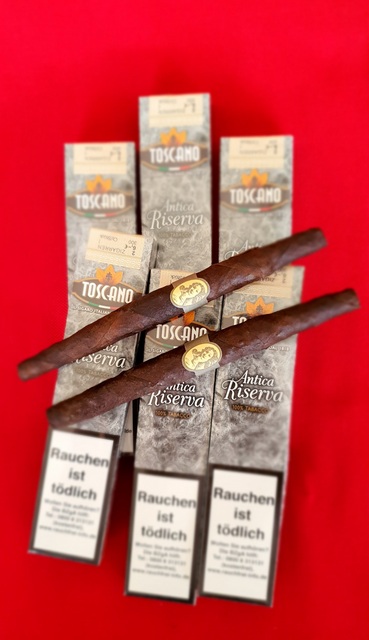 Toscano cigars are considered dry cigars – actually “cheroots” would be a more correct term – which means they do not have to be stored in a humidor. The Kentucky tobacco is not hygroscopic after fermentation and can be stored for years at room temperature without losing its flavor and taste.