Be Afraid, Be Very Afraid 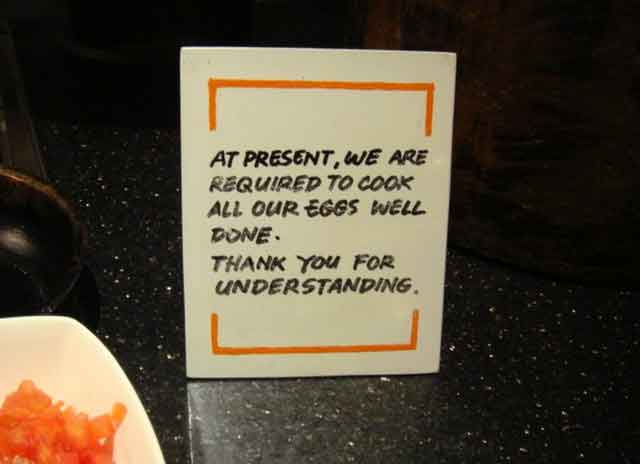 I took this picture while waiting for my omelet to be made at my hotel coffee house.

What has eggs got to do with Swine Flu?

Yes, pigs can fly but do they lay eggs?

The precautions some people take are laughable.

The current panic is due to a new strain of influenza A virus subtype H1N1 that contains genes most closely related to swine influenza.

Although experts have reassured the world that the H1N1 virus can’t be contracted by eating properly cooked pork, it was somehow named Swine Flu, and the moment that happened, some very “kiasu” countries swung into action immediately.

Top prize for stupidity must go to Egypt who took the opportunity to eliminate the country’s entire pig population. Now, that’s half a million pigs in total.

Indonesia has also vowed to cull all pigs in the country – including wild boars in Batam. Actually they should have organized wild boar hunting trips to Batam.

Russia is using the flu panic to ban pork imports from Spain and Canada.

China banned pork products from the US states of Texas, California, Kansas, New York and Ohio and said any US states affected by the flu would be added to the list.

A Canadian herd of pigs was infected with the flu and China immediately imposed a ban on Canadian pigs.

And of course, the Canadians, being the lame dicks that they always are, threatened to file a complaint with the World Trade Organization if China doesn’t lift the ban.

The thinnest book in the library must be Canadians with Balls.

China is particularly cautious this time because it was blamed for not doing enough during the SARS outbreak.