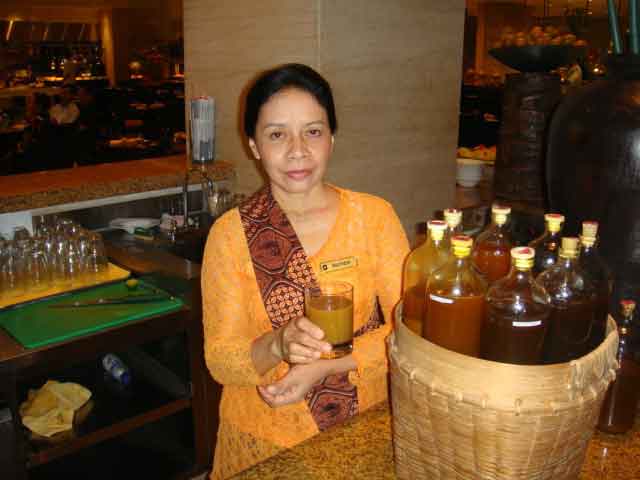 India has Ayurveda and China has its traditional Chinese medicine, Indonesia has Jamu.

The World Health Organization estimates that up to 70 percent of Indonesians use Jamu.

Jamu, a traditional herbal drink from Indonesia, is typically sold by women who peddle them in the villages. You can spot a Jamu gendong easily – on her back she carries a huge basket containing bottles of concoctions.

The herbal remedy is now also available in the form of powder, pills, capsules and ointments.

Many Indonesians swear by Jamu; they say Jamu have few or no side effects and can cure or substantially ameliorate almost any disease. An ex-girlfriend from Indonesia even insisted that some Jamu can produce the results that only years of Kegel exercises can produce.

Whether I was able to substantiate that claim will remain a secret I’ll carry to my grave.

The Satoo at Shangri-La Jakarta even has a Jamu woman during lunch time!

I told her I felt fatigued and needed an energy booster, and she went to work, measuring and mixing; in her hand is the concoction she created for me.

If anything it was a most delightful drink, so delightful that I asked for a second round!

Of course my Indonesian colleagues were all teasing me, reminding me that Jamu is more powerful than Viagra, etc.

I had six shots of Jamu in a recent three-day period.