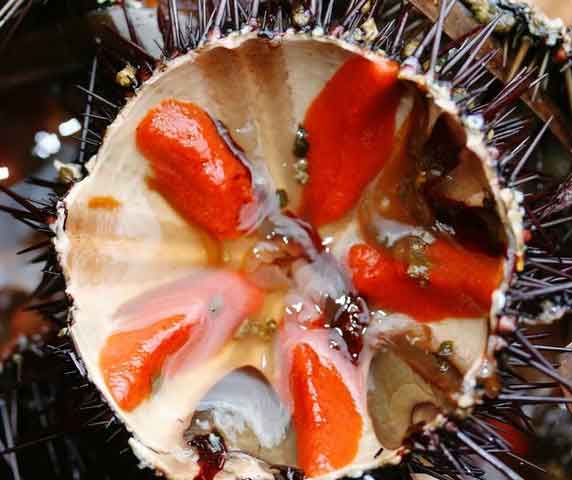 Uni, the creamy roe of the sea urchin, which ranges in color from rich orangey gold to light yellow, is one of the richest flavors to emerge from a shelled creature, which is why it’s in such high demand.

At Aoki, Singapore, chef Kunio Aoki sometimes serves sea urchin “in the cup,” meaning you use a teaspoon to scoop the golden blobs right out of the spiked creature.

Although it’s called “roe,” since the delicious morsels do resemble fish egg sacs, what we eat is actually the urchin’s five sex organs, the gonads – one of the reasons this seafood is considered an aphrodisiac.

Anyway, we normally associate uni with Japanese restaurants but accordingly the The Wall Street Journal, one chef who has mastered the urchin’s potential is Michael White, a Midwesterner of Norwegian descent who fell in love with Italian food, becoming the celebrated chef-proprietor of Manhattan’s Alto, Convivio and the just-opening Marea. With the urchin, a common ingredient in southern Italy, he focuses on the sweetness and texture when using it in his pastas.  He claims that the urchin’s sweetness comes from the creature’s diet of ocean vegetation (kelp and seaweed.)

“The flavor is less aggressive when cooked,” White says. “When warmed in oil, the urchins release water and become creamy, almost like a firm foam.” One of his prized dishes at Convivio is saffron gnocchetti topped with sea urchin and crab. He’ll also whisk the roe with olive oil to spread on crostini or serve it with bottarga (cured tuna roe), a drop of lemon juice and olive oil.

Sea urchins are being harvested all over the world but apparently Maine is a big exporter.

Twenty years ago, Maine’s urchins were the scourge of fisheries, their value unknown until sushi chef Atchan Tamaki, a Japanese native, arrived in Portland. “The lobstermen would fill oil drums with the urchins and burn them,” he says. But Tamaki hired them to bring him the spiky balls, and he started shipping them to sushi contacts in Japan.

The highest grade fetches up to US$40 for a quarter-pound tray but by the time it reaches Aoki, you’ll need to rob a bank to eat it.