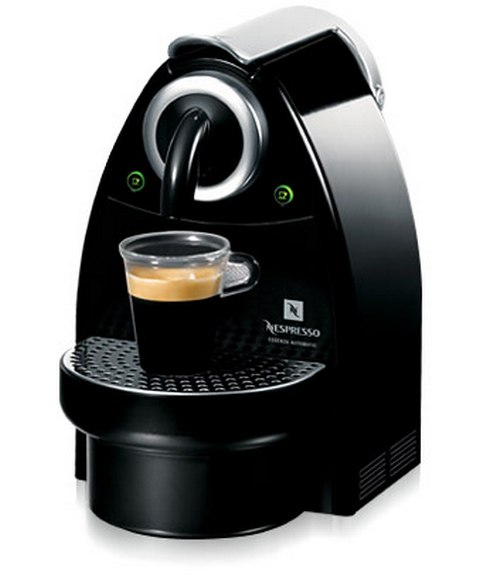 I had coffee machines that cost thousands of dollars.

These machines grind the coffee beans before brewing me a “fresh” cuppa of my fave Java.

Effort is required to purchase the right beans from the right sources, loading them into the machine, and waiting for it to heat up, etc.

Left too long in the machine, freshly roasted beans soon lose their flavor.

It takes the hassles out of coffee making.

The Nespresso machine is so convenient.

Drop a pod or capsule in, press a button and that’s it!

You can choose from 16 types of coffee.

Convenience is probably the reason why these are boom times at Nespresso – the brand of coffee and coffee makers owned by the Swiss food giant Nestle.

Nestle announced in February that sales of Nespresso products had grown 30 percent in 2008, taking annual revenue past its target of 2 billion Swiss francs, or US$1.7 billion, two years ahead of schedule.

Nespresso is the fastest growing among the most important brands at a company that owns household names like Perrier, Maggi and Nestle chocolate.

While Starbucks usually gets credit for standardizing coffeehouse culture and taking it around the world, Nespresso is credited with standardizing premium coffee in the workplace and at home through its pod machine, which brews a cup at a time from small aluminum capsules that hold just enough coffee for a serving.

Nestle probably did not invent the idea of the pod – the Italian coffee maker Illy claims that. But it parlayed it into a global marketing phenomenon, helped in no small part by the actor George Clooney, who appears in print and television advertisements in Europe and Asia.

The brand is distributed in 50 countries and employs more than 2,500 people worldwide. Most sales are in Europe, but it is also available in Latin America and North America and has made inroads in traditional tea markets in Asia.

Nespresso has about 175 boutiques, or “gateways,” where customers can buy machines, capsules and accessories.

The capsules are also available online.

The International Herald Tribune reported that in the heart of Nespresso’s flagship Paris store on the Champs Elysees, there was a sense of restlessness on a recent afternoon. The lines, six or seven deep at five cash registers, were not moving fast enough for customers eager to replenish their coffee capsules.

Leaving the shop, Pascale Le Guellec, 47, was clutching a bag containing 10 tubes, each containing 10 capsules, including some limited edition blends. She had paid euro 31.80 for her stash.

“I like the mix of coffees, the different flavors – it’s nice coffee” she said, scurrying back to her office nearby after a lunch break. “And I like the simplicity.”

This is the very reason why I bought a Nespresso machine, despite having owned coffee machines that cost thousands of dollars.