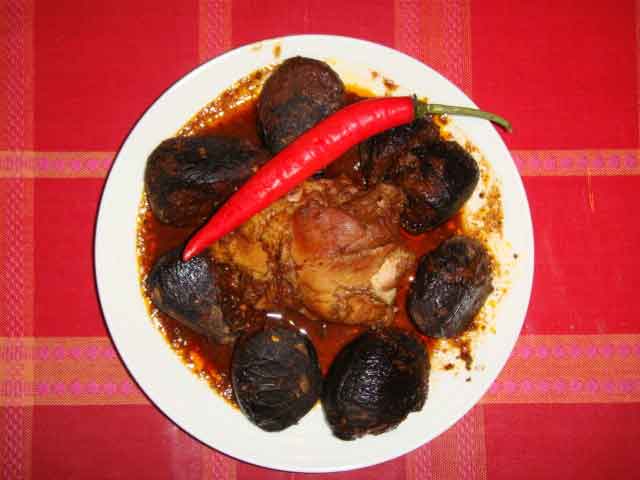 One of the hidden gems of Peranakan cuisine is the use of the fabulous keluak nuts from Indonesia.

The buah keluak has been called the truffles of Asia.

The raw seeds taken from the fruits are highly poisonous. Native people apparently have found ways to detoxify the seeds before consuming them. One way apparently, is to boil the seeds without their shells in several changes of water before leaching them in flowing streams or rivers for a few days. Another way is to boil the seeds with the shells intact and then burying the boiled seeds in ash for over 40 days. The seeds that we can buy in our markets in Singapore are apparently detoxified by the latter method.

The black, clam-shaped nuts are truly a taste sensation. The interior of the nut is removed from the shell and ground into a paste, then fried with blachan and other spices. It is then put back into the nut and cooked with the chicken dish.

The taste is amazing. As you scrape out the paste you savor the bitter, strong, chocolate flavor of the nut and are immediately reminded of similar dishes from other cuisines such as Spain and Mexico where chocolate is paired with chicken.