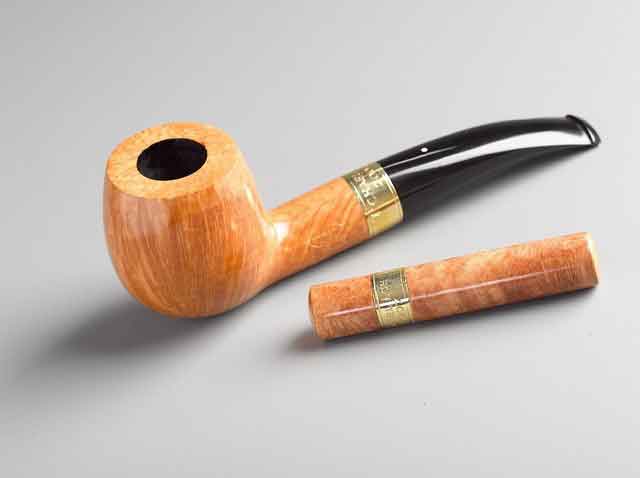 I first experimented with pipe smoking when I was ten by filling a pipe lying around at home with shredded newspapers and smoking it. I then purchased my first pipe from Robinson’s when I was in my late teens.

The lost art of pipe smoking could have started with the Egyptians – remains of tobacco leaves and pipes have been found with Egyptian mummies.

However in modern times one of the first descriptions of pipe smoking in the New World reached France through a report of Jacques Cartier, who explored the St Lawrence River as far as where Montreal, Canada, now stands. In giving his account of the voyage, Cartier described the Indians’ use of tobacco:

“There groweth also a certain kind of herb, whereof in summer they make great provision for all the year, making a great account of it, and only men use it, and first they cause it to be dried in the sun, then wear it about their necks wrapped in a little beast skin, with a hollow piece of stone or wood like a pipe.

“Then when they please they make a powder of it, and then put it in one of the ends of the said pipe, and laying a coal of fire upon it, at the other end suck so long that they fill their bodies full of smoke, till it cometh out of their mouths and nostrils, even as out of a chimney. They say that this doth keep them warm and in health; they never go without some of it about them.”

When the conquering Spaniards first witnessed the American Indians puffing with pleasure at smoldering tobacco leaves, they tried it out themselves, and soon fell in love with the habit of pipe smoking. The sailors then proceeded to carry the practice back to Europe, where it grew and spread. Jean Nicot, the French ambassador to Portugal launched tobacco as a cure-all and had the honor of the tobacco plant named after him – Nicotiana tabacum.

By early 17th century pipe smoking had spread to India, China, and Japan as well.

But it was in Europe where it flourished. Cigars were a social pastime while pipe smoking was and still is considered more “cerebral.”  By World War II pipes were associated with officers, philosophers, and other thinkers while cigarettes were for the masses as can be evidenced by this little prose making its rounds since those days:

Bad men want their women like cigarettes, slender and trim. They want them all in a row to be selected at will, set aflame, and when the flame has subsided, discarded, only to select another.

Fastidious men want their women like a cigar. They are more expensive, they make a better appearance and they last longer.  After all, if the brand is good, they are seldom discarded but used to the end.

The good man wants his woman to be like his pipe.  He wants something he becomes attached to, knocks gently but lovingly and takes good care of always.

A man will give you a cigarette, offer you a cigar, but never share his pipe!

Nobody knows who penned that but there is certainly an element of truth there.

So if smoking a pipe is a refined, relaxing ritual and more than a tool for reflection, then a well-crafted pipe is a work of art to be admired and appreciated. Up to and including the present day, there has been a never-ending search among pipe smokers and pipe makers to find the ultimate material for making pipes – anything and everything from corn cobs ala General Douglas MacArthur to meerschaum, a German word describing a soft mineral, found only in one area of Turkey, (Eskishehir). Meerschaum literally means “sea foam.” It is actually the fossilized shells of tiny sea creatures that fell to the ocean floor over 50 million years ago, there to be covered and compressed over the ages by layer upon layer of silt. Profound movements in the earths crust raised the creamy white stone of meerschaum above sea level where it is then harvested to make pipes.

But meerschaum pipes break easily, so it is the humble briar which is the material of choice. To date, nothing has ever surpassed the smoking qualities of briar, a hardened, dense wooden burl that is found within the root system (which is why it is sometimes called “briar root”) of the white heath tree (Erica Arborea), a plant that originated in France and Corsica.

Indeed it is the French who can, in all probability, lay claim for bringing the briar pipe to fruition. For years, in the small valley-enclosed village of Saint-Claude, pipe makers have been practicing their trade, carving pipes out of France’s native bruyere (which has subsequently been called “brier” and finally “briar.”) Briar is a particularly tough material for pipe making for a number of reasons. The first and most important is its natural resistance to fire. The second is its inherent ability to absorb moisture. The burl absorbs water from nature to supply the tree in dry times and likewise will absorb the moisture that is a byproduct of combustion. Briar for fine quality pipes can often be 50 to 100 years old when harvested for pipe making.

Once harvested, the briar burls are cut by skilled craftsmen using large, circular saws to remove the soft and cracked portions, leaving only close-grained, and extremely hard briar wood. This remaining briar is then rough-cut into small blocks, called “ebauchons”, in sizes and shapes suitable for fashioning into pipes of standard shape. Some particularly fine-grained briar is left uncut in larger pieces called plates which are used for larger “freehand” pipes – pipes that do not conform to any standard shapes.

When harvested, briar contains considerable moisture, sap and resin. The ebauchons and plates are boiled in water for several hours to remove much of the sap and resin. This is followed by long periods of drying (up to 2 years) so that all traces of moisture are moved from the wood. This careful curing and aging process is of the utmost importance in bringing out the finest smoking qualities of a briar pipe. It allows the pipe to breathe, to absorb moisture and oil from the tobacco, assuring a cool, dry smoke.

Once the curing process is completed, the briar is ready to be shaped into pipe bowls. A variety of hand and machine operations are necessary to complete this shaping process. Generally, the more handwork that goes into the carving of the pipe, the higher the price. Once the bowls are shaped, they are fitted with mouthpieces or stems (either vulcanite or lucite), hand finished, stained, polished and waxed. The new pipe is now ready to give many years of smoking enjoyment.

Due to the inconsistencies of nature and the conditions under which briar grows, only a small percentage of the thousands of pipes produced each year will have a uniformly fine grain pattern and perfection of finish upon which a manufacturer will stamp his name. These perfect pipes, which may cost thousands of dollars, are sometimes called “firsts” and represent the pinnacle of the pipe makers’ art. Serious pipe smokers and pipe collectors take great pride in owning and smoking these fine pipes although the grain does not affect the taste.  I was given a specially-commissioned flame grain DR*** root briar (Dead Root 3-star grade) pipe handcrafted by Alfred Dunhill for my 50th birthday in 2007; the entire process – sourcing for the briar to crafting the pipe and putting an engraved gold band around it – took nearly three years and cost an arm and a leg. Understandable, considering the fact that only one or two out of one hundred to two hundred premium quality briar blocks gives rise to a Dunhill pipe. The Dunhill people examine thousands of blocks in search of the few hundred that are flawless.

As for tobaccos,most pipe tobacco are cut into long narrow ribbons. Some are pressed into flat cakes (plug) which are cut up (flakes). Others are tightly wound into long ropes, and then sliced into discs.

Pipe tobaccos are often carefully treated and blended to achieve flavor nuances not available in other tobacco products. Many of these are blends using staple ingredients of variously cured Burley and Virginia tobaccos which are enhanced by spice tobaccos, among them many Oriental or Balkan varietals, Latakia (a fire-cured spice tobacco of Cypriot or Syrian origin), Perique (uniquely grown in St. James Parish, Louisiana) or blends of Virginia and Burley tobaccos of African, Indian, or South American origins. Traditionally, many US blends are made of American Burley with sweeteners and flavorings added to create an “aromatic” flavor, whereas “English” blends, preferred by purists,  are based on natural Virginia tobaccos enhanced with Oriental and other natural tobaccos. So the aroma comes strictly from artful blending only and careful, often historically-based, curing processes. My favorite used to be the hand-blended Dunhill mixture 73 which is no longer being produced, unfortunately.

What about the health aspects? Pipe smokers do not inhale. The conclusion drawn from several studies about pipe smokers was that they tended to live longer than the general population!

When we examine the risks and potential benefits of pipe smoking, we must also consider the psychological aspects of the hobby.

Many pipe smokers will tell you that one of life’s greatest pleasures is to enjoy a fine tobacco in a favorite pipe. The key word here is “enjoy”.

The psychological benefits of pipe smoking have been described by many who have enjoyed the hobby, including Mark Twain, Albert Einstein and others. Einstein felt that pipe smoking facilitated his mental clarity when working on a difficult project. Many pictures of him at work show that he favored billiard-shaped pipes. Pipe smokers often like to recite one of his most relevant quotes: “I believe that pipe smoking contributes to a somewhat calm and objective judgment in all human affairs.” Indeed, it is difficult to measure the calming qualities of pipe smoking and the possible beneficial effects on our work, productivity, relationships, and relaxation.

With further study we may find that enjoying a pipe in moderation can prolong life, in a way analogous to the recent finding that consuming alcohol in moderation may protect against the development of certain types of heart disease.

In reality, most experienced pipe smokers don’t look to science to tell them that pipe smoking reduces stress. This is something they know from their own experience. Nonetheless, scientists are interested in this phenomenon and many believe that stress reduction can prolong life. Some researchers feel that smoking reduces stress by stimulating “reward centers” in the brain and affecting brain chemicals, such as dopamine. Changes in these brain chemicals lead to a sense of calm and relief from worry.

As a statement of rebellion against political correctness, it’s hard to beat pipe smoking. It’s not nearly as risky as smoking cigarettes, and it offers unique pleasures. A whole new world of enjoyment will open up for you once you start discovering the various types of briar, the thousands of blends of exquisite tobaccos from all over the world, the hundreds of traditional and unusual shapes, sizes, and finishes for a pipe, and the possibilities for beautiful artwork carved into meerschaum and briar pipes. Remember the advice of this century’s greatest scientist: Pipe smoking facilitates relaxation and objectivity. Also keep in mind that Einstein did not worry about defying convention. And to be a pipe smoker in this day and age, you really must be an individualist.