The Raccoon has Peed 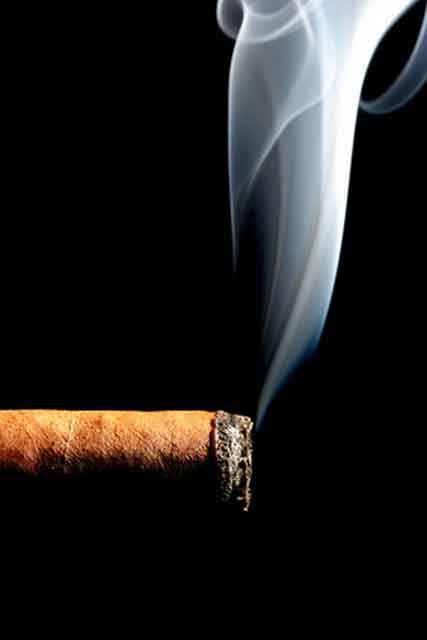 An aromatic pleasure that is 7.5 inches in length and 52 rings in gauge. It’s called a Cohiba Behike, the most expensive cigar in the world. Only 100 boxes of 40 sticks each were made to celebrate the 40th anniversary of Cohiba. Priced at US$20,000/- per box, all stocks were sold out even before production began. (On the resale market, connoisseurs are prepared to pay up to three times the original amount – that’s a lot of moola for something which goes up in smoke.) Cohiba, the word used to name Cuba’s best and most famous brands of cigar – which was created for Fidel Castro (who quit smoking by the way – what was he thinking!) – is taken from the term for “tobacco” used by Caribbean natives hundreds of years ago.

What is it about Cuban cigars, or Havanas as they are often referred to, that is so appealing?

Cuban cigars are banned in the United States due to John F Kennedy’s embargo against Cuban products. (The night before signing the embargo into law, the president’s aide Pierre Salinger was instructed to buy up all existing stock of JFK’s favorite H Hupmann Petit Havanas – all 1,200 of them.) Still, cigar insiders say that today when you go into selected cigar stores in the US all you need to do is to whisper one of the following three phrases: “The eagle has landed” or “The raccoon has peed” or “Smokey has left the building” and you would be shown a cache of the priced stogies allegedly smuggled from Cuba which they would sell you at beaucoup dollars. Real cloak and dagger stuff, all for a smoke.

Cuban cigars are unique for two main reasons. Firstly, the tobacco, grown in the Vuelta Abajo Valley, is unlike anything grown anywhere else in the world. Secondly, Cuban cigars have never been blended; they contain only Cuban tobacco.

But it can be confusing. Many non-Cuban cigars have the same name as Cuban cigars. The story is that Cuban cigar makers smuggled the seeds out of the country before Castro came into power and continue to make their cigars in places like Honduras, Nicaragua and so forth. In London, for example, it is possible to have two almost-identical boxes of Partagas sitting side-by-side: one Cuban, and the other from the Dominican Republic.

Habanos SA (a joint venture between the Cuban government and French-Spanish tobacco giant Altadis SA) engages in legal battles with these people and in some cases it has lost. For example, in a long legal battle, the Cuban government lost its battle for the Cohiba brand name in the US. So you can buy a Cohiba in the US but it is not the same as the Cuban Cohiba and the difference is very, very stark.

The real McCoy will carry one or more of the following words: Habana, Cuba or Hecho en Cuba (“Made in Cuba” – by hand – henco en mano – and not as the myth would have us believe, rolled on the thighs of native virgin girls) and carry the Habanos logo, plus the very elaborate Cuban government warranty seal which is almost impossible to fake.

The best places in the world to find a quality Cuban cigar are Geneva, London and Munich. The finest Havanas are found there because they command the highest prices there. In Singapore, there are fake Havanas being sold. Be careful.

Back in the dotcom heydays, I have seen many pony-tailed kids turning green from big cigars sticking out of their mouths – first-time smokers. The Americans got into the act in a big way, launching cigar magazines and writing books about cigars, when all they had in terms of the best-selling cigar there was the rather unimpressive Macanudo from the Dominican Republic – something connoisseurs won’t touch with a 10-foot pole. I attended Cigar Aficionado’s Big Smoke in New York City not long ago and was shocked by the ignorance of some American cigar smokers – some didn’t even know how to light a cigar, a few didn’t even know cigars have to be cut or punched first before you can smoke them.

In Asia the cigar has always been appreciated by tycoons and crooks alike – just check out any old black-and-white Chinese movies. Lately some Ah Bengs have gotten into the act too. I encountered a guy (who drives an expensive car with an unpronounceable name) and who smokes cigars and belches and farts – sometimes all at once. Unfortunate; he’s enjoying his cigars while we are forced to smell his farts! Indeed, the cigar scene in Singapore is populated by some very crude and obnoxious asswipes and poseurs – ignoramuses who behave like know-it-alls. Cigar places here are a far cry from those gentlemen clubs in London.

It’s not by chance that Hong Kong resident wrote the best cigar book on rare Cuban cigars – An Illustrated Encyclopedia of Post Revolution Havana Cigar, in 2003. Min Ron Nee, a cigar-living Hong Kong doctor, co-authored the book with Andriano Martinez Rios, a former executive of Habanos. The thick, heavy tome includes photos and comments on just about every brand and vitola, or size, ever made in Cuba. It is still the definitive work on the subject for the moment. (“Min Ron Nee” is a nom de plume.)

Asian moguls have walk-in humidors in their homes. Hong Kong resident, George Wong is considered perhaps the greatest cigar collector on earth. Wong is part of a small group of Asians who are unbelievable cigar enthusiasts. Their collections, as well as knowledge, are second to none. Consider the walk-in humidor of the Wong family: it’s about 20 feet long by 10 feet wide with two levels, humidity-and temperature-controlled, and packed to the ceiling with boxes of  Cuban Davidoffs, Cuban Dunhills, pre-Castro cigars and other rare limited-edition smokes. Not even the Davidoff or Dunhill shops in London had such a stock when their namesake Cuban cigars were freely available in the market at the beginning of the 1990s. (Davidoff had a big fight with the Cubans in the 90’s and now have its cigars made outside Cuba.)

Why smoke a Cuban? It calms me and forces me to slow down, plus my insurance company doesn’t consider me a smoker. Tobacco contains nicotine but cigar leaf contains the smallest amount of nicotine of all tobacco – only about the 2% of the leaf’s content. Much of this disappears as the cigar burns. It’s safe because no one inhales when smoking a cigar. It’s impossible to inhale a cigar.

How does a Cohiba Behike taste?

The first third delivers a regular but massive smoke – grassy, vanillin with hints of delicate tobacco spices like warnings before the storm. Once you’re almost finished with the first third and a little bit tired of this massive and regular draw, the Cohiba Behike takes you by surprise with an explosion of tastes and delicate spiciness. It rises like a thunder and develops in an exponential way!

Loads of oak overwhelms your mouth in a generous and heavy smoke. The draw becomes easier, faster, and more complex and you’ll have to make an extra effort to overcome the beast. Once you get used to its new style, it mutates again. As you prepare for the finale, the cigar turns into a live volcano expressing all its complexity and strength. Ahh, orgasm in the mouth.

Who supplies the cigars in Asia?

It is likely that the cigar you smoke comes from David Tang.

Sir David Tang, the founder of Shanghai Tang and the chairman of The China Club is also the chairman of the Pacific Cigar Company Limited, which controls the Cuban cigar franchise for Canada and the whole Asia Pacific region. Sir David also started the Cigar Divan, a shop dedicated entirely to Cuban cigars, located in the lobby of the classically elegant Mandarin Oriental Hotel in Hong Kong. Tang became acquainted with cigars after he got into university in England. “My father gave me a Romeo y Julieta in a tin tube and told me, ‘Now you’re a man,’” he recalls fondly. “So, naturally I smoked it, and because it was so mild, I thought I could take on any large cigar.” He laughs. “Anyway, I became hooked and became a passionate cigar smoker.”

And how did he come to be the purveyor of cigars to Asia?

“Ah! That’s another story,” he says with a snort of laughter. “Years later, back in Hong Kong, I heard that there was a row between Davidoff and Cuba and I thought there might be an opportunity there and ended up getting the Cuban cigar franchise for Asia, that had been going nowhere. Then I went to Havana and ultimately opened the Cigar Divan at the Mandarin Oriental.”

This small shop tucked behind the elevators is far more than a cigar stand. It is a stunningly appointed little grotto, manned by knowledgeable clerks, with couches and chairs where cigar aficionados can gather to talk, read periodicals, discuss cigar kultur and, of course, smoke a nice Upmann, Montecristo or Partagas. The Divan infuses the lobby of the Mandarin with a subtle but tantalizingly rich aroma of the best cigars in the world, giving this already august hotel all the more the feeling of being the place in Hong Kong where true club-going English gentlemen convene when “in the Orient.”

Born in Hong Kong into a wealthy family on August 2, 1954, young David was sent to Britain at age 13 for schooling. Unable to speak English, he was refused admission at Eton and Harrow and instead ended up at the Perse School in Cambridge, where he was the only Chinese boy in residence. “I was so lonely in England because I had such a language problem,” he recalls. “Always I had a sense of how alien I was. The struggle gave me a huge complex, but it did plunge me into reading, music and chess as an escape.”

Tang later studied philosophy at King’s College, London University, and then law at the University’s College of Law. While in England, he not only learned to speak a flawless Oxbridge English that is every bit as arch as that of the royals, but picked up many of the affectations of a latter-day British gentleman.

Sure, there are other vendors of Cuban cigars in Asia today but with David Tang, we know for sure we have the genuine stuff.

I know, because until I sold my collection, I was, according to Wealth,  the owner of the largest private collection of cigars in Singapore.

A note about vintage cigars. Of course, cigars that are mature smoke a lot better, compared to green cigars. That’s a no brainer. But if you go looking out only for so-called premium-priced “Limited Edition” cigars, then you’re the one with no brains. You’ve simply become a victim of some very clever marketing.

BTW, if you go to the United Arab Emirates, you may wish to try the Punch Robusto, a regional-edition cigar made for Phoenicia Trading, the official broker of Habanos cigars for 42 countries, including the Middle East. This is not, however, the first time the Punch Robusto has been made. It was the first regional-edition cigar for Switzerland in 2005 and then used again in this instance.