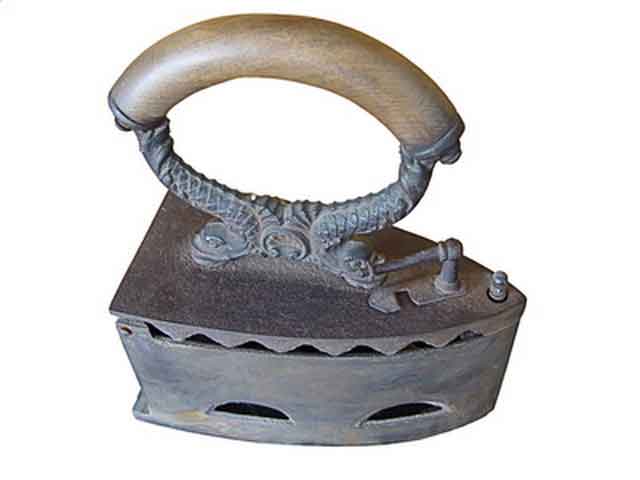 Not long ago researchers from Morgan State University did an experiment with 381 men and women aged from 19 to 89. They tested these subjects for intelligence and personality traits. They then matched up the scores and concluded that in older men and women, “agreeableness appears to be negatively related to intelligence.” In other words, being older and unfriendly might actually equate with being smarter. Simply put, becoming crabbier when you are older might actually be a sign of intelligence.

This perhaps explains why I am so obstreperous these days, compiling lists like this:

With no explanation whatsoever, two friends just stopped all contact. If I had wronged them in anyway I would like to apologize, but I’m not even given a chance. These two friends just vanished from my life.

Strangers Who Assume I Assume They Are My Friends

No I didn’t type that wrongly. Read on and you’ll know what I mean:

I am a collector of antique irons, such as the one pictured above. I received an email one day from some stranger who wanted to know where she could purchase an antique iron urgently. I replied with the appropriate information and quipped that if she would only drop by our next antique collectors’ meeting, the group will gladly present her with an antique iron to start with. She then counter-proposed that I give her the iron on that very day itself and added that she would meet me no matter where I’ll be to get it.  She sounded like getting that iron was a matter of life and death. Curious, I stupidly agreed. So at the appointed time I showed up but she was late. When I texted her to ask if she was definitely coming, she replied that she was on her way and if I could order her a champagne in the meantime.

She came, collected her iron – and quaffed her Dom Pérignon (which I paid for) – and promptly disappeared from my life.

Now, you tell me is that reasonable behavior?

Now you know why I’m very very selective who I consider as friends nowadays.

I’m still looking for her, and if I find her she’ll end up as a pelt on my wall.

When they have an issue with me, or when they have something to say about me, they don’t have the guts to say it in my face. Instead they talk to everyone else but me or blog about me in their blogs and when confronted, they say what they wrote has nothing to do with me. With “friends” like these who needs enemies? They don’t seem to realize that I too can play this game.

The moment they open their mouths my depression gets worse.  They talk about shopping, shopping, shopping. They talk about buying, buying, buying. They talk about jewelry, new age shit, staying up all night to watch DVDs, upgrading to bigger houses, getting new cars, visiting interesting new places, investing in startups, etc. But they become tongue tied in the presence of those who are depressed or need help and they make themselves scarce when they need to be there to offer comfort. Sadly, these are friends I can no longer relate to.

The girl struggling with unrequited love, another who got pregnant, a basket case who got dumped and begged for help in the middle of the night, a friend who borrowed several thousand bucks, the dick wart who slept at the foot of his girlfriend’s apartment for two nights after she told him to fuck off, a loser who quit his marketing job to work in hospitals wiping the backsides of sick people, all these friends sought help from me, and then disappeared from thin air. Maybe seeing me will remind them of their past problems. That’s fine with me, as long as your problems are over and you are getting on with life, that’s ok with me. I wish you the best. For me the rule of thumb is simple – if you don’t respond to my text messages or emails after a reasonable amount of time, I’ll get the message. Just don’t come crawling back when you need more help in the future. There is a limit to my patience, generosity and magnanimity. Just please don’t think I’m a sucker, is all I ask. Yup, it’s ok to treat me like SOS or The Salvation Army but please don’t take me for a sucker.

When I was throwing parties at chi chi places and spending money on them, when tin after tin of Beluga was being served and the Dom Pérignon was flowing non-stop, these freeloaders were there. Now that I’m not in the mood to throw parties, these parasites wouldn’t even give me the time of the day. They just gone off my radar screen – my emails to them remain unanswered. In the beginning I didn’t have the foggiest idea why they didn’t contact me anymore. Now I know. When I stopped giving parties, I’ve become unpopular overnight. I’ve outlived my usefulness.

Lots of people have drifted in and out of my life all these years. If a person makes it to my Shit List, he or she is finished. Period. There is no way back. I refuse to have anything to do with him or her. As far as I am concerned, he or she is as good as dead. I count a few scumbags on this list. There are various reasons I will not go into now as to why they made it to this list but one involved me being cheated of 50k. Ok, it’s only money you say but then, it was a long time ago, I was in my 20’s and I had to borrow 50k from the bank to help a friend. Never got the money back. It took me years to repay the bank and mind you, it wasn’t interest free ok? In the meantime this faggot has gone on to write books teaching children how to be honest and he volunteers on SOS counseling suicidal people. What irony! Foot note: Do I tell people they are on my Shit List? Well, not in so many words, but each of these guys know why I refuse to have anything to do with them. At least I have the testicles to tell them and not keep them in the dark.

A handful are on this list – these guys would respond to my call for help, no matter what the circumstances. I am comforted by and thankful of the fact that all I need is one phone call, and they’ll be there for me or for my family.

These are guys who think I have better jobs than them or who have lost their jobs due to retrenchment, etc or and are now resentful that I am still gainfully employed – there are a couple of such people I know of. Didn’t Franklin  Jones once said “Nothing changes your opinion of a friend so surely as success – yours or his”?

Only one person wins hands down. Used to be a shining star but now totally screwed and sapped by emotional knots and disturbances; forever on an emotional roller-coaster.

Also one person on this list. Still trying to figure out what to do after all these years.

I have a couple of  friends on this list – it appears that they can’t be bothered to do things to sustain the friendship but they’re there. If I am in their neck of the woods and I contact them, they’ll meet me. Otherwise I can forget about them contacting me. They are just there. And they know I know they are there.

A handful on this list. When the caller ID shows their names, I don’t answer my phone. Then they irritate me further by calling me from some other numbers not stored on my phone memory.

A couple of friends are like that. They would not hesitate to bang on my door in the middle of the night if they need me. But when they don’t need me, I am just another persona non grata to them.

I’ve lived here since God knows when and the only neighbors I engage with to any extent worth mentioning is KW and his wife. I say “hi” to Mrs C, Mr and Mrs S and their sons as well as Mrs W and her kids whenever I see them/recognize who they are. I mean, kids  – and their hair color – change! (even attended Mr W’s funeral , as well as Mr C’s wake) but my immediate/next door neighbor on the right is something else – the parents are nice people but the daughters (who look like elephants, by the way, except the youngest one) could win the world record for unfriendliness any time. No contest. We are talking about educated people who went to uni but who possess the most horrendous social skills ever – for example if one of them is in the elevator and they see you approaching they will NOT hit the Door Open button but would let the door close in your face – and while this is happening she will look at you as if you are completely transparent, and with that frigging smirk on her face.

My neighbor on the left is a strange family straight out of some Dean Koontz or Stephen King novel – the moment they see us, they will down look as if suddenly the floor opens up exciting vistas yet unexplored. I’ve never seen them smile. They look depressed and suicidal. Their door is always closed, windows may be open but curtains are always drawn.

In the entire block, the cockiest people are young married couples with young kids – those who are probably up and coming in their careers – they walk around with their noses up and think they are so high and mighty.

So much for my friendly neighborhood…