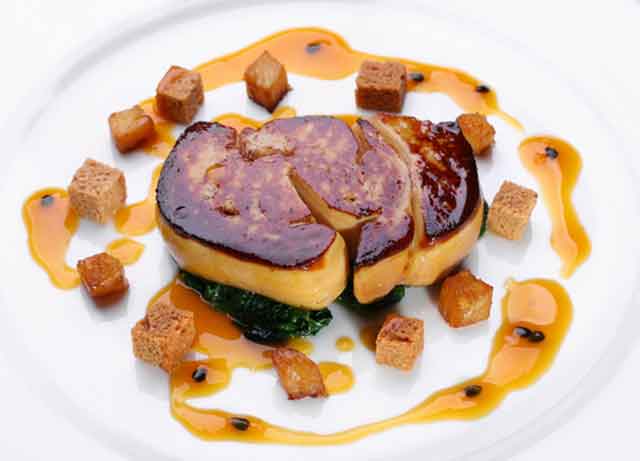 Comedienne Margaret Cho may gag – she jokes about it – your wife may gag, your mistress, girlfriend and that cute mainland Chinese GRO (Guest Relations Officer) from the karaoke may gag, but geese don’t gag.

Famous Chicago chef Charlie Trotter who was here last year for the Sun Festival doesn’t seem to know it. He and some animal rights activists are trying to ban foie gras, citing the gagging of geese as an act of cruelty.

I have the utmost respect for chefs like Trotter but he has stopped serving foie gras – goose liver, though what you get in restaurants today are more likely to be duck liver – since 2002 because he found its production methods unnecessarily cruel.

The battle against foie gras is being fought on many fronts – California enacted a law to eventually ban its production and sale, as have other states and countries.

To animal welfare groups, the obscenity of force-feeding, known by the French word “gavage,” is self-evident. But the owners of Hudson Valley Foie Gras accuse their critics of anthropomorphism and ignorance of duck anatomy and behavior. They say the practice is as benign as it is ancient, since waterfowl lack a gag reflex and have sturdy throats that easily tolerate grains, grit, stones and inflexible gavage tubes. To understand gavage, they say, is to accept it – as they insist poultry researchers have, after examining birds for signs of undue suffering during gavage and finding none.

Visitors to Hudson Valley Foie Gras, seeing gavage for the first time see no pain or panic in the ducks, no quacking or frenzied flapping in the cool, dimly lighted open pens where workers with a gavage funnel do their work. The birds submitted matter-of-factly to a 15-inch tube inserted down the throat for about three seconds, delivering about a cup of corn pellets.

The practice, done three times a day for a month, followed by slaughter, seemed neither particularly gentle nor particularly rough. It was unnerving to see the tube going down, and late-stage ducks waddling bulkily in their pens, but no more so than watching the epic gorging at an all-you-can-eat buffet, where morbid obesity is achieved voluntarily, with knife and fork.

The human appetite for sentient protein – food that flinches – is an ethical puzzle that many of us solve by deciding not to think about it. But those who lament the exploitation of God’s creatures should be careful not to spend all their pity in one place. There is, after all, a vast universe of discomfort and death in US agribusiness, which processes 9 billion chickens and 98 million pigs a year, often in close confinement, ending in slaughter on a monumental scale. Against this backdrop – not to mention the misery of the veal pen, the sadness of the pet shop and circus – the sum of animal unhappiness in Hudson Valley’s tidily run operation, which kills 250,000 ducks a year, seems trivial.

What seems brutal in isolation can be mitigated in context, as any parents who have had a baby circumcised might tell you. Singling out the foie gras duck for salvation seems unwarranted and unwise, particularly when doing so would threaten the livelihoods of farm workers and only drive foie gras production somewhere else.