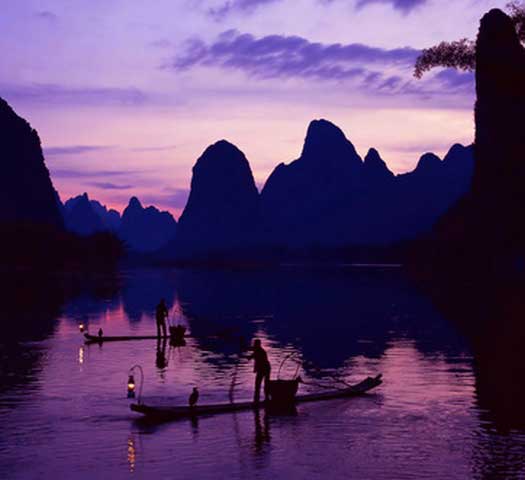 My buddy Alec leaves for Guilin today. This reminds me of my own trips to Guilin.

I first visited Guilin more than 30 years ago and re-visited it again in 2007. It was interesting being able to buy fish from small boats sailing along the Li River and have the fish cooked in the boat we were sailing on.

A traditional mode of fishing along the Li River in Guilin involves the use of cormorants to catch fish.

Fishermen on bamboo rafts use strong lights suspended over the water to attract the fish.

The cormorants, which are tethered with rings round the base of their necks, catch the fish and then disgorge them for the fishermen.

When their work is done the rings are removed so they can eat.

Guilin is one of China’s most picturesque cities, with a population of 670,000, situated in the northeast of the Guangxi Zhuang Autonomous Region of China on the west bank of the Lijiang (Li River). Its name means “forest of Sweet Osmanthus”, owing to the large number of fragrant Sweet Osmanthus trees located in the city. Its scenery is reputed by many Chinese to be the “finest under heaven”, or directly from Chinese: “the mountains and rivers in Guilin are the number one under the heaven.”

Cruising along the Li River, I thought I was right inside a Chinese painting!

The Li River originates in the Mao’er Mountains in Xing’an county and flows through Guilin, Yangshuo and Pingle, down into the Xi Jiang, the western tributary of Pearl River in Wuzhou, its course of 437 kilometers is flanked by green hills.