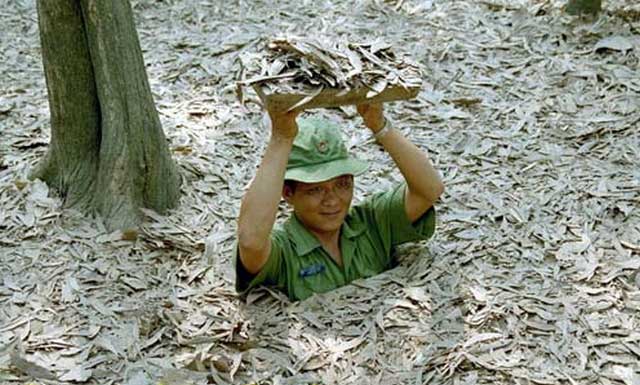 That’s a Viet Cong demonstrating how he gets in and out of a Cu Chi tunnel.

One of the most amazing things discovered during the Vietnam War was the underground tunnels in Cu Chi – 250 kilometers of complex of tunnels used by Viet Cong guerrillas as hiding spots during combat, as well as serving as communication and supply routes, hospitals, food and weapon caches and living quarters for numerous guerrilla fighters.

Imagine fighting a war underground in the suffocating, sweltering blackness of tunnels, barely tall enough for a man to crawl, let alone walk.

Here, a wrong turn could send you plunging onto the lethal bamboo spikes of a punji stake trap.

Elsewhere carefully placed trip wires were primed to detonate a grenade or release a box of scorpions onto their unsuspecting victim.

In other places the entire walls of the tunnel seemed to move, covered with an impenetrable mass of spiders and stinging fire ants.

The role of the tunnel systems should not be underestimated in its importance to the Viet Cong in resisting American operations and protracting the war, eventually persuading the weary Americans into withdrawal.