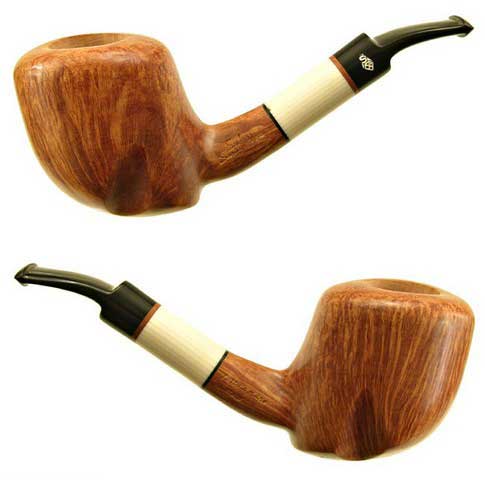 Just acquired a Stefano Santambrogio Smooth Freehand with Galalith Shank Extension – this novel and attractive pipe rocks on its base and sports a fine robe of straight and bird’s eye grains.

Born in 1865 at Meda in Brianza, a young Stefano Santambrogio moved to Gallerate where he found a job with the first company pipe manufacturing company in Varesotto, the Manifattura Pipe Fratelli Lana.

In 1899, after the closure of this company he moved with his wife to Gavirate and was hired as manager at the Fabbrica Pipe Rossi of Barasso.

In 1910 Stefano, enterprising, capable and charismatic, acquired a watermill and adjacent farmhouse in a “borghetto” at Gropello di Gavirate. In spite of numerous difficulties he began producing his own pipes using the watermill as his only source of energy

The production reached its peak in the 1930’s and 1940’s. 130 workers were employed and about 100.000 pipes produced each month and exported to every corner of the world.

In 1951, after the death of the founder, his sons Renzo and Armando ensured the continuity of the company until 1981 when Stefano Santamgrogio, the present owner, took over on the death of his father, Renzo.

It is said that the present owner, who was born in 1952, before learning to say “papa” he said “pipe” demonstrating how much pipe manufacturing is in his blood!