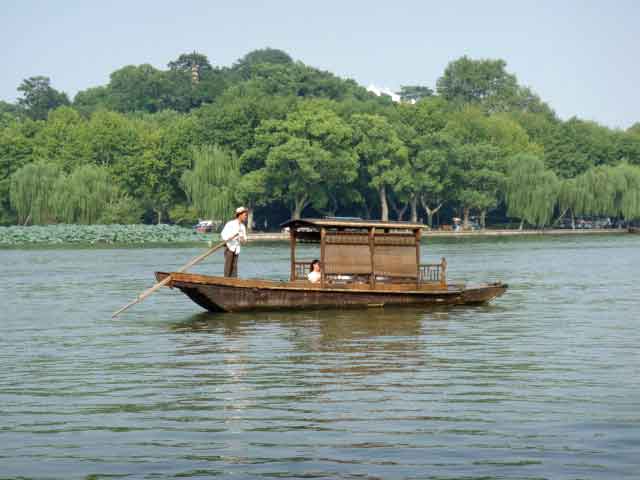 Marco Polo visited Hangzhou in 1290 and was so overwhelmed by the beauty of the Xi Hu, or West Lake, that he transcribed, and thus popularized, a famous Chinese saying “Shang you tiantang, xia you Suhang” which means in heaven there is paradise, on earth there is Suzhou and Hangzhou. The Chinese like to refer to Hangzhou as “Paradise on Earth.” It’s a lofty nickname, and Marco Polo would turn in his grave if he knows what has become of this place.

Hangzhou, an hour and a half by train from Shanghai, is the capital of Zhejiang province. With a population of just 7.9 million, it is one of China’s smaller cities but it feels more like a big town because of hordes of tourists who flock there all year round to visit its Xi Hu or West Lake, by far, Hangzhou’s most prominent feature.

The large lake sits in the middle of the city and is surrounded by ancient temples and gardens. Within the lake itself, there are multiple islands to visit, a causeway that is ideal for walks or cycling tours and many grand views.

Because it is a major tourist destination, hustlers proliferate. One particular bad one we encountered when Yin and I visited in September was the driver of taxi #3991 who tried to take us for a ride and abandoned us in the middle of the countryside when he realized we could not be conned into accepting any of his propositions.