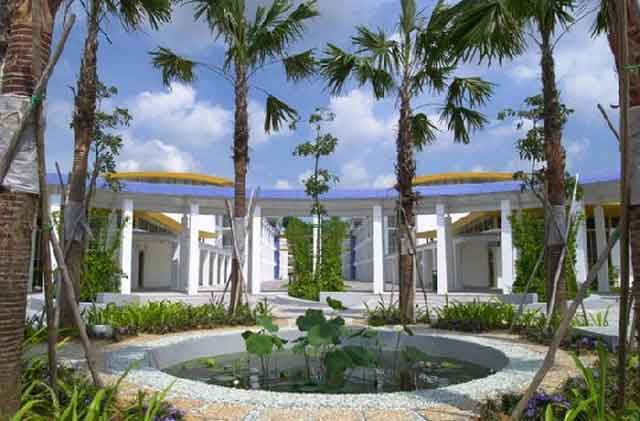 My grandparents – God bless their souls – died within six months of each other in 1985. Grandpa was born in 1898, the year Empress Dowager Cixi engineered a coup d’etat, and arrested Emperor Guangxu; grandma was born in 1902, the year the first movie theater in the United States opened in Los Angeles, thus making them 87 and 83 respectively – or 88 and 84 if you calculate using the Chinese way – when they passed away.

Their three surviving sons are themselves getting on in age, the oldest (my old man) is 78, the other two early 70’s and mid 60’s. In their wisdom, they thought in order to save their descendants from the inconvenience of having to trek to the cemetery which is situated out in the boondocks, they made the decison last year that they would exhume my grandparents’ graves and have their remains cremated. In any case, burial sites in Singapore face the risk of being exhumed en mass one day anyway. (Yup, in this wonderful country, even the dead are not left to lie in eternal repose.)

The entire process of grave exhumation is a somewhat interesting one.

On October 8, 2008, a brief ceremony was held during which my grandparents’ tombstones were “knocked” and smashed.

At 4am on October 14, 2008 – a year ago – my cousin Wilson and I joined my dad and my 3rd and 4th uncle at my grandparents’ graves for the actual exhumation itself.

Yes 4am in the morning. Despite the full moon the entire cemetery was cloaked in darkness. The air was still. It was deadly quiet, other than the occasional buzz from a couple of mosquitoes and some noise from the chicken farms nearby.  Everyone’s demeanor was grave; for it was a solemn undertaking we were embarking on. (Sorry I just couldn’t resist the puns.)

Why did I choose to participate in this exercise?

I was told that it would bring me luck and boy, at this time of my life, (when I feel I am absolutely down on my luck especially with the morons at work), do I need some luck indeed. I was also advised it is the honorable, respectful thing to do. But truth be told, I did it out of a sense of morbid curiosity, more than anything else. Besides, since I’m insomniac anyway, why not? Better than tossing and turning in bed yet again. Moreover this would be the very last time I’ll be visiting my grandparents’ graves, plus, I’ve never in my entire life been to a cemetery at 4am in the morning.

It was an eerie scene that greeted us at 4am that morning. Above each grave was a tarpaulin “roof” with red candles lit to illuminate the vicinity, the flickering flames casting ghostly shadows on everyone and everything.

The gravediggers had dug all the way to my grandpop’s coffin by the time our little party arrived. Then a chainsaw was used to saw open the coffin at both ends. I will never forget that sound. I know for the rest of my life, I don’t ever want to hear the shrill sound of chainsaws at 4am in the morning at some cemetery somewhere, or anywhere for that matter.

I was filled with a macabre sense of anticipation as the heavy lid of my grandfather’s coffin was lifted.  I’ve seen perfectly preserved corpses displayed at museums – one particularly well preserved (and creepy) one in Ho Chi Minh City’s Vietnam History Museum still freaks me out every now and then when I think of it  – and I’ve heard of people seeing hair and nails growing on bodies that were buried long after the deaths have taken place. So I was feeling a little anxious. I prayed that it would not be a spine-chilling experience.

The moment of truth came – what greeted us was a coffin filled with water and clothes floating on top. We were all aghast at the water! However, the flesh and internal organs have long since disintegrated. Only bones remained. And in case you’re wondering, there was no smell whatsoever though I was mentally prepared for an olfactory assault.

The clothes were fished up and discarded. Surprisingly, they were still in pristine condition after all these years.

Then the grave digger did something I would never bring myself to. He plunged his bare hands into the water-filled sarcophagus-like coffin. He was feeling and searching for bones! He started picking up bones which he placed into a large white opaque plastic bag, not unlike one of those laundry bags you find in hotel rooms.

From the depths of the murky water, bones from the fingers came first, then the larger bones – an ulna (elbow bone) here, a radius (forearm) there, a huge femur (thigh bone, the longest, most voluminous, and strongest bone in the human body) showed up – my grand dad was a tall, strong man with an almost military bearing and posture; we could see that his femurs were long, solid and heavy – followed by a long tibia (shinbone) still connected to the knee joint… Then, from the watery grave, I saw ribs, ribs and more ribs, a pelvic bone, a shoulder blade, some other bone fragments, a jawbone,  and, finally the skull being retrieved.

The skull’s appearance took my breath a way. If I had expected a familiar face, a face I would recognize, then I was disappointed. I knew better than to expect that of course but it was difficult to relate that skull to the man I once knew as my grandfather. An un-educated but kindly soul who regaled me with stories of his youth, and of his life during the Japanese occupation, a rough yet gentle simpleton of an old man who was basically a peasant, but when I was a little child, would purchase fresh colorful flower crabs from the market, boil them, travel more than an hour by bus all the way from Jurong to the CID quarters at Robinson Road where me and my parents lived, and patiently cracked the crabs to remove their sweet succulent flesh to feed me. It was such a treat.  To this day, when I see flower crabs, I think of my granddad.

The gravedigger at work was fascinating to watch. I cringed a little every time a piece of bone was brought up. Well, you don’t really know what to expect in a situation like this, do you? But strangely I felt neither grief nor sadness; it was as if I was a voyeuristic spectator to someone else’s “show.” I looked at the facial expressions of my dad, my uncles and my cousin; I came to the conclusion that their expressions must have mirrored mine – a bit of a frown and bewilderment. The only person who was almost preternaturally nonchalant was the contractor in charge of the grave diggers. Throughout this time he was walking all over the place with a swagger while smoking away.

When all the bones were collected, a bottle of clear Chinese wine was emptied into the plastic bag, the wine was then squeezed out through the bag’s opening and then the bag was tied up.

The same procedure was repeated at my grandma’s grave situated a stone’s throw away, except that the bag of bones was smaller, my grandma being a rather petite woman. Again the clothes were in mint condition – I could make out the pretty little patterns on my grandma’s blouse.

While the foraging of bones and skeletal remains was going on in the deadly silence, suddenly loud croaks emanating from some frogs nearby gave us all a fright, making us jump momentarily.

At my grandma’s grave the grave digger retrieved some pieces of jewelry – a couple of silver bangles, a silver hairpin and a well preserved jade bangle from the cloudy waters. We all decided there and then that 4th uncle should keep the jade bangle as “family heirloom.”

Well, that just about summed up what happened at the cemetery. When I got home it was barely 6am. I went back to bed. At 7am Yin woke up with a start, thinking that I’ve overslept and have missed my appointment at the cemetery! I told her that while she was sound asleep, we had exhumed both my grandparents’ graves, that I’ve came face to face with death and have crawled back to bed for a little rest myself.

The remains in the two plastic bags were sent for cremation the same morning and at 1:30pm of the same day we gathered at Choa Chu Kang Columbarium for a last ritual.

My dad was told to carry the urn containing my grandpa’s ashes up to the columbaria niche on the second floor; he had to carry the urn while sheltering it with an umbrella and “invite” my grandpa to his new resting place before climbing up the stairs to the niche. The umbrella sheltering the urns seems to be de rigueur at Chinese funerals.

Some relatives were also there, they were milling around the vicinity but no one seemed to be anywhere near the little truck with the urns of ashes. So after my dad walked off with the urn containing my grandpa’s ashes, I – the eldest grandson, the eldest son of the eldest son – volunteered to carry the other urn, the one containing my grandma’s ashes to the niche. I cradled the urn gingerly with my left hand, resting the urn on my body, and with my right hand held an old-fashioned umbrella made of wax paper.

I verbally “invited” my beloved grandma to her new and final resting place and walked up the flight of stairs. I was overwhelmed with emotion when I did that, floods of fond memories of my grandma and what little time I’ve spent with her hit me like a tsunami.

For some strange reason, one particular incident which occurred when I was a young boy came to mind. I was crying because my palms were full of the tiny, fine needle-like “thorns” or trichomes from some bamboo shoots I touched and hard as I tried, I could not get rid of them. My uncles and aunts didn’t know what to do too.  Everyone was exasperated; it didn’t help that I was bawling my eyes out at the same time. That’s when my grandma stepped in. She told me she knew how I could get rid of those trichomes. “Poor puppy, just rub your tiny hands on my hair,” she said.  I did so hesitatingly, rubbing my hands on her hair which she wore in a bun and like magic, the trichomes disappeared completely!

Now many years later, my grandma was as close to my heart as she possibly could. I felt humbled to have the honor of doing this little bit for her, carrying the urn that bore her ashes.

Long story short a religious ceremony ensued, relatives were told to place coins into the urns – “no one-dollar coins, only silver ones” – which were then placed in the niche. This was immediately sealed with a marble plaque which had porcelain pictures of my grandparents and engraved with my grandparents’ names and dates of birth and death; the rest of the time was spent dividing the food offered, to relatives and family members.

For my dad and his brothers, it marked a closure of sorts; for me, the whole episode forced me to once again, ask myself all kinds of questions about life, about death, about God, about religion, about heaven and hell, about relatives, about legacies, about loss, about love, about memories…