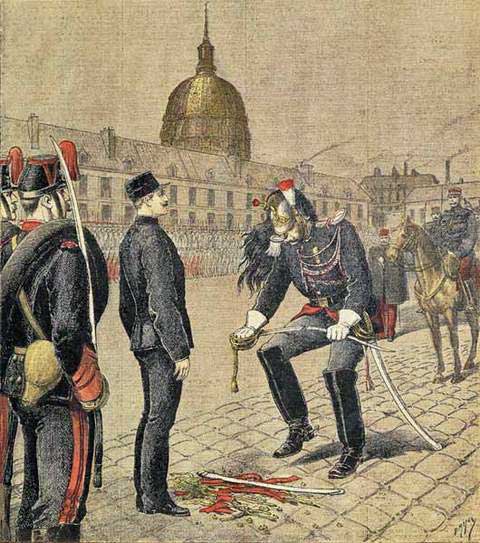 The degradation of Alfred Dreyfus.

Old farts like me will remember Branded, a Western series which aired on NBC from 1965 through 1966 starring Chuck Connors as Jason McCord, a United States Army Cavalry captain who had been drummed out of the service following an unjust accusation of cowardice.

The opening scene of the series was memorable, depicting McCord’s cashiering – sometimes referred to as a degradation ceremony: his hat is pulled off, his epaulets are torn from his uniform, whose buttons are pulled off, and his saber is broken, while a drum played over the opening theme song (“All but one man died there at Bitter Creek … and they said he ran away … not a word of it was true.”) He was then sent out of the gates of the fort where this occurred, which were then closed behind him. This scene was repeated each week.

Well, that scene was enacted again on October 28 by the Thai government.

Yesterday, Thailand said it would strip fugitive former premier Thaksin Shinawatra of his royal awards and his police rank as the government presses on with a campaign against its arch-foe.

Prime Minister pretty boy Abhisit Vejjajiva said the government’s legal advisory body, the Council of State, had recommended that the National Police Office should revoke Thaksin’s rank of lieutenant colonel from his days in the police force from 1973 to 1987. It should also confiscate the two highest royal awards given to Thaksin – the Most Exalted Order of the White Elephant and the Most Illustrious Order of King Chula Chonklao, Abhisit said.

Come on, give that bastard a break!