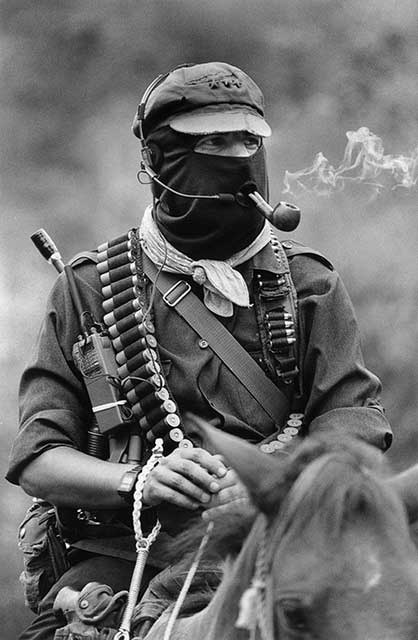 Subcomandante Marcos, the colorful masked revolutionary leader, is quite a character.

The de facto spokesman for the Zapatista Army of National Liberation, a Mexican rebel movement is always wearing a black ski mask, and is always pictured smoking his trademark pipe. No one knows his real identity.

The Mexican government alleges Marcos to be one Rafael Sebastián Guillén Vicente, born June 19, 1957 in Tampico, Tamaulipas to Spanish immigrants. Guillén attended high school at Instituto Cultural Tampico, a Jesuit school in Tampico, where he presumably became acquainted with Liberation Theology. Guillén later moved to Mexico City and graduated from the Metropolitan Autonomous University, then received a master’s degree in philosophy at the National Autonomous University of Mexico and became a professor.

Guillén’s family is unaware of what happened to him and refuses to say if Marcos and Guillén is the same person.

I suppose you could say he is doing to pipes what Che Guevera does to cigars.