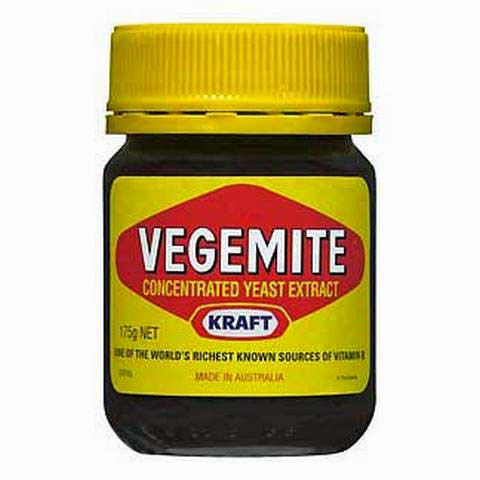 Bill Granger, Australia chef and cookbook author said that Australian food was really bad until the 1970s: boiled meat and vegetables without any butter or salt.

Vegemite, the ubiquitous yeast extract, was one of the things that actually had any flavor, and that’s why it became so incredibly popular.

Although it was actually “invented” in New Zealand back in n 1919, the Aussies, who claim it as their own,  are crazy about it. Look for an Aussie anywhere in the world and he or she is likely to have a little bottle of the black salty, gooey paste stashed somewhere!

Babies are weaned on Vegemite, school kids eat it on sandwiches, adults revere it as a hangover remedy, a vital source of Vitamin B and a staple breakfast food – spread lightly on hot buttered toast.

Britain may have its Marmite, but nothing beats the Vegemite.

That’s why when Kraft Foods Australia recently changed its ingredients and attempted to give it a new name, the Aussies were up in arms.

Vegemite is now available in a version mixed with cream cheese and it is called Vegemite iSnack 2.0.

Don’t those guys know that Halloween is so passé?