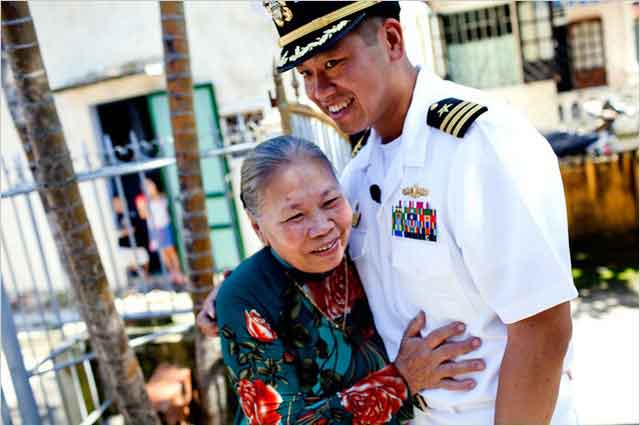 Thong Ba Le, a commander in the wartime South Vietnamese Navy fled Vietnam in 1975, with his wife and four kids. They spent two days at sea in a fishing trawler crammed with 400 refugees before being rescued by a US navy vessel.

They made it to the US. His four other kids left in Vietnam eventually re-united with the family as well.

One of Thong Ba’s sons Hung Ba, was five when they fled Vietnam.

Hung Ba is a model of the success of many children of refugees.

A standout scholar and athlete in high school, he graduated from the US Naval Academy with a BSc in economics in 1992 and subsequently earned an MSc as well as an MBA.

He was commissioned as a US Navy officer and became the first Vietnamese-American to command a US Navy destroyer.

His vessel, the USS Lassen, made a formal port of call at Danang on November 7.

“To be able to return to Vietnam after 35 years and to be able to do it as a commander of a United States naval warship was an incredible honor and a privilege,” he said.

What a nice heart-warming story with a good ending.