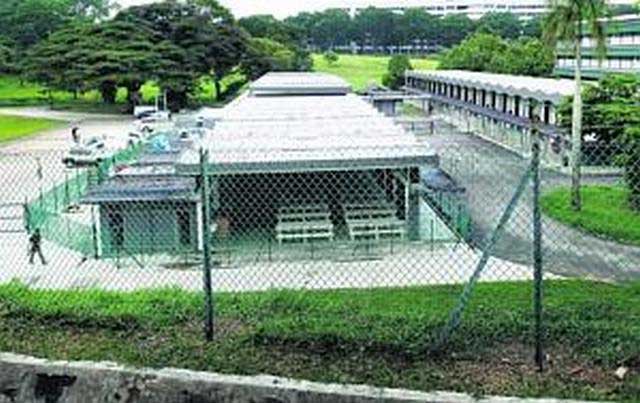 This is "home sweet home"?

In view of the concerns, some guidelines were drawn up.

For example, the quarters will initially take in 600 workers to prevent the area from becoming overcrowded. The Ministry of National Development will consider increasing the capacity to a maximum of 1,000 in future if there is a need and after future consultations.

About 30 workers have moved in so far.

Fences around the dorm and surveillance cameras have gone up.

Teams of residents will be patrolling the neighborhood from next week.

Why are foreign workers so frightful?

Some people I spoke to has convinced me that the level of intelligence in Singapore – especially among Serangoon Garden residents – is probably at an all-time low.

“They are dark-skinned, they look different” is one argument.

Come on Singaporeans, long before the slaves in America were emancipated, we have learned to live together in a multi-racial, multi-cultural society.

Also, aren’t we still standing in line to eat at that roti prata stall in Jalan Kayu operated by people who are dark-skinned and who look different?

Aren’t we still standing in line to eat the briyani at that Tekka market stall operated by people who are dark-skinned and who look different?

Aren’t we all still snapping up bargains at that huge 24-hour departmental store in Little India operated by people who are dark-skinned and who look different?

So what’s your frigging problem?

“Those from China are the worst” is another argument.

Yeah but aren’t most Singaporeans of Chinese ancestry anyway? True, many mainland Chinese residing here may be “assholes and opportunists” but aren’t their nubile babes the ones your husbands and brothers and sons flock to Geylang to copulate with?

(Understandable, really, considering how most Singaporean women transform into fat cows the moment they hit 40.)

Aren’t you standing in line and paying top dollars to savor “new-wave” Chinese cuisine brought over these “assholes and opportunists”?

Isn’t our economy benefiting from the influx of these people?

Come on, Singaporeans; unless you want to do the work these foreigners have chosen to do, stop whining and stop being so paranoid and hypocritical.

Would you like it if you have to work overseas and the country you are working in house you under jail-like conditions and treat you like criminals?

What right do you have to consider every foreign worker as guilty until proven innocent?

Never had a problem with any of them.

Those poor fellows who arrive here to do the shit work that you don’t want to do are here to toil, to break their backs and bust their asses (at slave rates, I should add) so that they can send some hard-earned money home to support their families.

Not one foreign worker is here with the intent to rob, steal, or rape.

More crimes are probably committed by Singaporeans than by foreign workers.

By the way, what are those Serangoon Gardens vigilantes gonna do if they should ever stumble on a foreign worker in the middle of a crime?

Bash him up? Lynch him?

What does the law say about citizens forming patrols – wouldn’t that be considered illegal assemblies?

Or maybe those Serangoon Garden idiots should form a local chapter of the Ku Klux Klan huh?

Maybe that will make it all legal huh?