Butcher Begging to be Axed 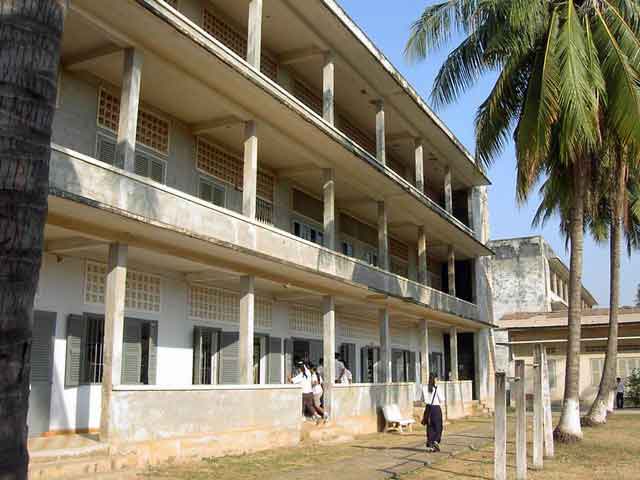 Talking about massacres, under their leader Pol Pot, the Khmer Rouge wiped out nearly two million people as they abolished money, property and set up huge labor camps in their bid to turn Cambodia back to a rural “Year Zero.”

One of the most extreme actions of Pol Pot was to purge the country of anybody who wore glasses. Superficially inexplicable, there was a twisted logic to this policy. Those who wore glasses were more likely to be educated and more likely, therefore, to have the intellectual faculties to challenge his regime. As such, in order to ensure that the majority of such people would be eliminated, all those wearing glasses were purged.

Tuol Sleng or S-21 was at the heart of the Khmer Rouge security apparatus. Inmates were taken from there for execution at a nearby orchard at Cheong Ek, now known as the “Killing Fields.”

I visited Tuol Sleng twice (it is now a museum) – each visit was a spine-chilling experience. Blood stains are still on the walls. Metallic bed frames that were used to electrocute prisoners are still there. The entire place is eerie. For those of you who marvel at the ruins of Angkor Wat, I would urge you to spend a couple of hours at Tuol Sleng to get educated.

Duch – a former maths teacher whose real name is Kaing Guek Eav – ran Tuol Sleng and was responsible for overseeing the murders of 15,000 inmates there.

On July 31, 2007, he was formally charged with crimes against humanity and detained by Cambodia’s United Nations-backed Cambodia Tribunal.

(The court is officially known as the Extraordinary Chambers in the Courts of Cambodia.)

Duch’s lawyer Kar Savuth confirmed that Duch was asking to be acquitted on the grounds that he was not a senior member of the Khmer Rouge hierarchy.

Since Duch has repeated apologized and asked for forgiveness during the early days of the trial his outburst was met with shock.

By the way, Duch was baptized by the Golden West Cambodian Christian Church and claims to be a lay pastor now.