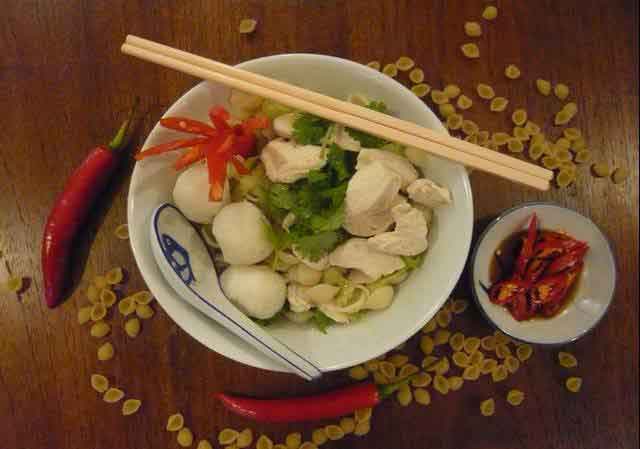 The picture above shows a dish cooked by my youngest kid when he was only 13.

As for me, though I’ve taken lessons from luminaries like Sompon Nabnian and Emmanuel Stroobant, the first dish I ever cooked in my life was probably the condensed milk and butter loaded scrambled eggs that my primary school teacher Jeffrey de Souza taught me to whip up when I was 11.

Yes I can cook.

Many bloggers write about food and restaurants but I am one blogger who can actually cook and have been paid for my cooking.

(The worst blogs are those with nothing but pictures and accompanying captions, but hey, who am I to comment about them right?)

Back to my cooking…

Early memories of cooking included easy dishes like Sesame Oil Noodles (boil noodles, drain water, add dark soy sauce, chilli-garlic sauce, and sesame oil and mix well) and Steamed Egg with Minced Pork, but instead of steaming the egg in a cup chawanmushi style, it was done in a medium size shallow dish.

Then when the camping-by-Changi-beach craze hit Singapore when I was in secondary school, I – always the appointed cook – would simply cook rice in a tin pot over charcoal, and warm up canned sotong (cuttlefish) and prepare a nice plate of Ayam brand “sardines” with tomato sauce – basically cover the “sardines” with lots of chopped fresh onions, drip some dark soy sauce and squeeze a lime or two on the dish and serve. I would also boil some vegetables, add some finely-chopped garlic, generous dollops of oyster sauce, and garnish with crispy fried shallots.

An additional treat would be a brick of cold silken tofu served with slices of century egg (the best are those with thick weepy yolks) drizzled with sesame oil and light soy sauce and garnished with chopped spring onions and a dash of pepper.

Dessert would be boiled green mung bean soup – complete with pandan leaves for a nice aroma.

Not much culinary skills required. In fact no skills whatsoever required.

During national service, if I wanted supper, I would make soup in my bunk. Pour a pack of Knorr Swiss cream soupmix powder into an aluminum mess tin filled with water, heat using solid fuel, and stir until bubble. If very hungry add a pack of instant noodle. Maybe I was too impatient but the powdered soup couldn’t really melt completely and there would be clots and lumps.  Till today, I avoid cooking or eating anything like that.

Sometimes we would have a instant noodle fest – take a huge metal bucket (hopefully not one where our mop was sitting in) throw in ten packs of instant noodle, bring to boil and three or four hungry army boys would squad around the bucket to stuff our faces.

After the army, a Filipino-Chinese girl friend from Manila taught me how to fry egg fried rice Filipino style. I became quite good at it. She taught me some other things too.

Someone else – who taught me quite a lot of other things as well – loved to cook soup for me to “fortify” me. That was her pièce de résistance. The crescendo of a hot date. The culmination of a slow lazy afternoon. Now don’t get too excited, her soup was simply Campbell Cream of Mushroom soup, brought to a boil with an equal amount of water and some evaporated milk and just as the soup hit boiling point, a fresh egg was cracked and plonked in. The partially cooked egg yolk not only tasted so heavenly, the feel of it on my tongue was divine.

Indeed food is not just taste – it is visual and sensual, olfactory as well as texture. Food must not only taste and smell good, food must feel good too.

That prompted me to cook some “real” soups for a change.

Other than my mum’s Bak Kut Teh (pork rib soup) one of them was Winter Melon Soup – dig out the flesh from a medium size melon so that you can use it as a “bowl” into which you throw in a tiny cube of Jinhua ham, a couple of dried scallops, some chicken meat, a few wolfberries, a dried red date or two, fill with water, seal and steam.

One other favorite would be Kiam Chye (pickled mustard leaf) Duck Soup; remember to add pickled sour plum and a slice of ginger to remove the ducky smell.

I slowly became adventurous and experimented with western dishes – I cooked Comfit de Canard or Duck Comfit, lots of pasta – no brainers those, after all, the Italians stole the idea from the Chinese – and steaks. It’s not easy to grill a nice piece of steak – I make sure it’s grilled three minutes on one side and four minutes on the other.

Then I started cooking foie gras. Hmm, gradually my circle of friends got bigger.

Then I started importing truffles and shaved them over risotto and suddenly the world was beating a path to my door.

Ditto for my Ox-tail Stew, my Lamb Shank, my Sesame Oil and Ginger Chicken (which I cooked for the Kimptons in New Zealand – they’re still talking about it 30 years later), my Seared Scallop and Seared Tuna combo dish, my Slow Stewed Pork Trotter, my Butter-poached Lobster Tail, my Squid Ink Pasta, my Pig Head Skin braised with Five-spice Powder and Superior Soy Sauce, my Lamb Chops (topped with a twig of Rosemary) and my Slow Poached Tasmanian Sea Trout.

Ah, fair-weather friends. But I’m not complaining. They were my guinea pigs.

For the longest time I would roast a turkey on Christmas Eve. Now I’m too lazy to do that I usually order one from somewhere.

The Tandoor North Indian Restaurant at Holiday Inn Park View probably pioneered that dish, but they don’t serve that anymore. I phoned them last year to place an order and they thought I was an idiot. Then I went to Mumtaz Mahal Restaurant at Far East Plaza to enquire because this restaurant was supposed to be started by the original Tandoor crew after they left the Holiday Inn. But the manager at Mumtaz Mahal thought I was a retard when I asked him about tandoori turkeys. Anyway I was eating at Muthu’s Curry Restaurant one day and found out that they can do it.  I ordered two – yummy!

When I went to Melbourne for training some years back, I was made to cook for the whole class when I overslept and showed up late for class one morning. Apparently the instructor Bob Jacobson has heard of my culinary skills.

My Thai Tang Hoon (glass noodle) Salad is not bad too, and so is my Pat Krapao Moo Sap (minced pork in chilli, garlic and basil, Thai style) and my Tom Gar Kai (chicken cooked in coconut milk, but instead of chicken breasts which the Thais use, I use the more tender meat from the thighs.)

Next I tried curries – I was told my curry chicken is to die for. “But everyone can cook curry,” said my mother-in-law when my wife told her I could cook curry.

Well, wait till to try my mother-in-law’s curry.

No mother, not everyone can cook curry.

This is a fact recently re-confirmed when someone who prides herself as a good cook cooked me some chicken curry.

I ate a piece out of courtesy.

I’ve tried baking my own bread, but using a bread machine. I don’t have the patience to bake bread from scratch.

I haven’t got much formal training in cooking, mostly when I like a dish I eat somewhere; I come home and try to replicate it.

My brother-in-law Soon is like that. His Hokkien Mee can pose a serious threat to some of the so-called famous Hokkien Mee stalls in Singapore.

I suppose when you live overseas you don’t have much choice. My sister-in-law, who lives in Sydney too can make her own Char Siew – something I haven’t tried doing.

When I retire, I may become a restaurateur. I’ll open up a place to go into cooking – nothing big, but a small, little intimate and cozy place of two or three tables at most. Only for dinners, maybe three nights a week. No menus, I’ll cook what I can source from the morning’s market and of course, diners are accepted strictly on a reservation basis.

As for desserts, I already have someone in mind to do all my desserts.

And smoking (confined only to Cuban cigars only – and of course pipe smoking) will be allowed in an adjoining room specially set aside for pre and postprandial use. There will also be a small selection of fine wines, cognacs and single malts.

Who wants to be my partner?