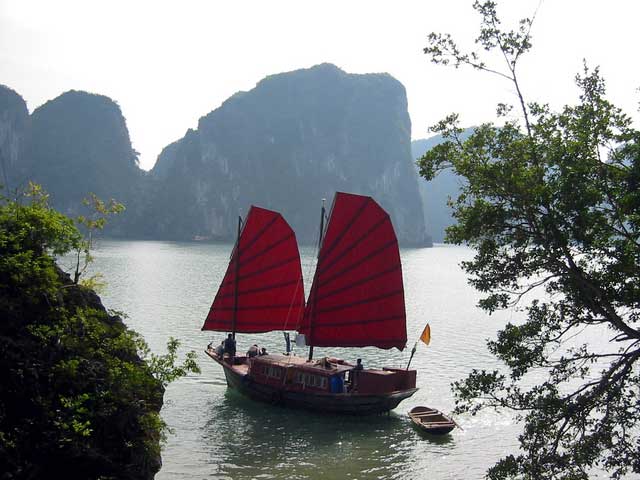 Designated a UNESCO World Heritage Site, the magnificent Halong Bay is spread across a 580 sq mile areas, with more than 2000 pinnacle-shaped limestone and dolomite outcrops scattered across it.

According to legend, the bay was formed when a gigantic dragon – ha long means descending dragon – plunged into the Gulf of Tonkin.

Located near Halong harbor are several floating villages. Along with tourist boats, some lovely, traditionally made junks still sail the bay.

Having been to Guilin, Halong Bay was a major disappointment.

First of all, it’s a major ripoff. Ask around, different people on the same boat can pay very different prices. Travel agents are the ones who rip tourists off. Everyone wants a piece of the pie.

Second, the environs are polluted and full of garbage.

Fumes from the many boats can suffocate you!

Third, the majority of boats are old, filthy and smelly, and badly maintained; food served on board expensive and horrendous – as a matter of fact when Yuyin and I went on a cruise organized by Exotissimo Travel on board one of these boats on January 25, she suffered from food poisoning!

There are more luxurious versions of these boats but prices quoted are ridiculous – something like 500 bucks US for one night’s cruise.

I would strongly discourage anyone from visiting Halong Bay.

Donate your money to Haiti.

They really need it.