Rabbit in the Year of the Tiger 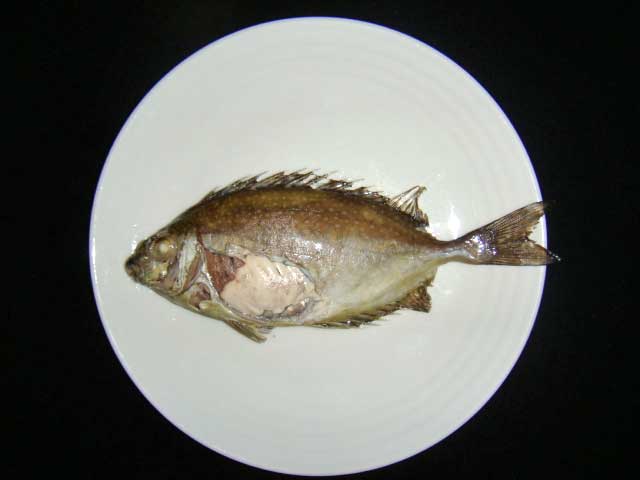 The one thing I do like about Chinese New Year is the Pai Chia fish.

Today is the second day of the Chinese New Year.

Every year, on the second day of Chinese New Year I would rush to the market at day break to buy up all the Pai Chia fish – and risk becoming bankrupt in the process.

This year is different.

This year I didn’t have to pay a cent for my Pai Chia fish because my friend Freddie Tan came to pai chia with two huge bags of the priced catch!

He drove his BMW limo right up to my humble abode with his lovely wife and stunning model-like daughter (with legs that seem to go on forever)!

(Pai chia means to visit, bearing new year greetings, and because the fish is popular during the Chinese New Year period it is known as the Pai Chia fish.)

Thanks, Freddie! You made my day!

It can be found from the Arabian Gulf in the west, to China in the north and North-West Australia in the south.

This species can grow up to 12 inches although its average length is five inches.

It is found near reef areas as well as river mouths, where they congregate in large schools. Locally in South-east Asia, this fish is normally not favored as a table fish except for the period immediately before and after the Chinese New Year.

Why is this so?

This is the period when the Rabbit fish gets ready to spawn and its roe and milt is considered to be a delicacy by the Chinese who believes that eating these rare tasty morsels will bring good fortune.

This is the time when it also becomes grossly overpriced – easily the most expensive fish in the market during this period. This year, it is selling for at least S$120/- a kilo in some markets.

I don’t care about good luck; I believe the price is worth it because I love the fish for its very delicious milt (the white part in the photo above) and its roe.

Not very lucky for the fish, I must say.

But very lucky for me as I get to eat it every year and this year I’m especially lucky because I’m the recipient of Freddie Tan’s generosity.

To celebrate I’m opening a bottle of vintage Comtes de Champagne Taittinger (1999) to go with the fish.