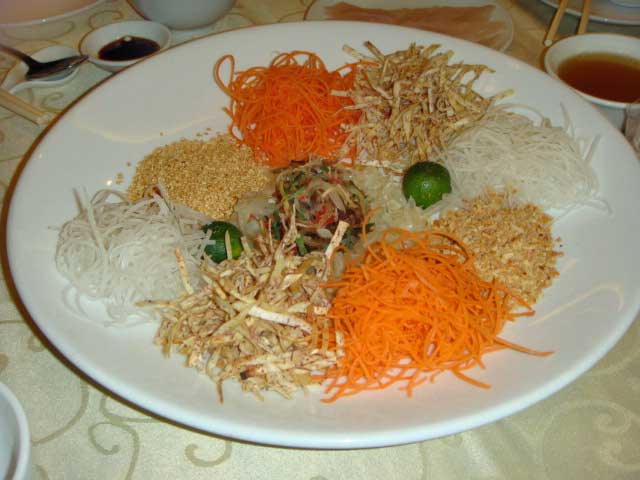 Today is the seventh day of Chinese New Year, according to the Cantonese; it is supposed to be “Everyone’s birthday” and – don’t ask me why – is the day to eat more Yu Sheng, a raw fish salad concocted by Singaporeans.

The Cantonese and the Teochews eat raw fish occasionally but Yu Sheng, the dish of raw fish slices with a mixture of julienned carrots, radish and other vegetables, is eaten only during Chinese New Year.

This dish, which originated in Singapore, is probably the greatest con-job in the world. Many years ago, four chefs (Sin Leong, Hooi Kok Wai, Lau Yoke Pui and Than Mui Kai)  – known in local food circles as the Four Heavenly Kings – were jointly responsible for creating this dish,  and the rest, as they say, is history.

The profit margin for this dish is so high that every mother’s son will serve it. Even that jerk Ascione Gaetano used to serve it in his Italian restaurant.

“Yu Sheng” is the homonym for “abundance of wealth and long life” and you need to spout Chinese idioms as you prepare it.

(During the Chinese New Year period, people feast on dishes with names which are homonyms for good wishes, ie, when said aloud, a dish’s name means something auspicious in Chinese; for example, “Fa chai” – seaweed – sounds like “Prosper”.)

Here’s a suggested step-by-step guide (there are many variations) as you prepare Yu Sheng before it is being “tossed”:

1. When the dish is placed on the table, greet everyone by saying “Gong Xi Fa Cai” and “Wan Shi Ru Yi”, which means “wishing all prosperity and may all your wishes be fulfilled.”

2. Add the raw fish slices to the platter, and say “Nian Nian You Yu” and “You Yu You Sheng.” This means “Wishing you all abundance in the new year.”

3. Gesture towards the fish roe and say “Da Ji Da Li” which means “Wising all lots of luck and good fortune” before spreading it all over.

4. Point to the lettuce and cabbage in the platter, and say “Hong Yun Dang Tou” and “Qing Chun Mei Li”. This wishes your guests eternal youth and beauty.

5. Point to the shredded carrot and shredded white radish and say “Feng Sheng Shu Qi” and “Bu Bu Gao Sheng”. This is for prosperity and promotion.

7. Scatter the crunchy golden crackers and say “Pian Di Huang Jin” which means that the floor will be paved with gold.

8. Pour the oil and sauce in, circling them over and the platter to increase wealth from all directions, saying “Yi Ben Wan Li” and “Cai Yuan Guang Jin.’

Next, get everyone to toss everything together and make a complete mess of the place.

The act of tossing the salad is called “Lo hei” – Cantonese for “fishing for luck.”

Yeah, good luck to the unfortunate bastard who has to clean up the frigging mess.