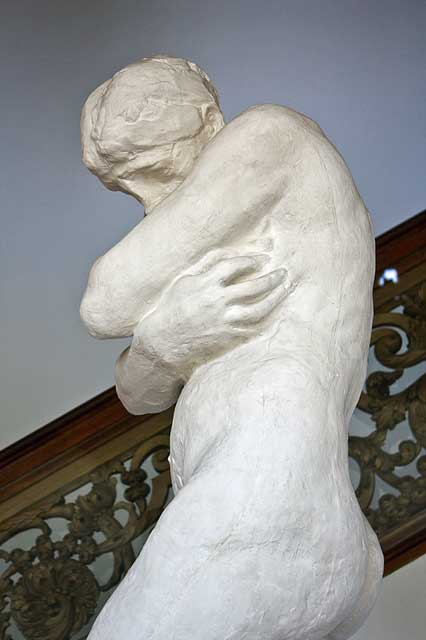 Eve covers herself and lowers her head in shame in Rodin's sculpture “Eve after the Fall.”

35-year-old project manager A Teo (that’s the name The Straits Times used) and his girlfriend, a 28-year-old personal assistant paid S$410 and checked into a Siloso Beach Resort’s rooftop garden suite on February 27 to celebrate their 11th-month anniversary, but their romantic escapade was ruined by two peeping toms.

At about 1am, they were buck naked in the outdoor jacuzzi of their eighth-floor suite when they saw someone leaning over the glass balcony of the adjacent room and peeping at them.

Fifteen minutes later, the peeping tom reappeared, this time with another person from the same room.

Teo shouted at them and they disappeared.

Speaking to The Straits Times, Teo said that the rooms on that floor face the sea and are separated by a tall stone wall.

But if one leans over the glass balcony, one can look around the wall and into the adjacent balcony.

The couple called the police and informed the hotel’s security at the same time. After the cops arrived, Teo found out that there were 16 youths in the room next door.

Two 21-year-olds, allegedly the peeping toms, then went over to the couple’s room to apologize to them.

Teo said: “My girlfriend is traumatized. It was meant to be a celebration and now my anniversary is marred.”

A few thoughts came to my mind when I read about this incident.

First of all – call me old-fashioned – it seems like an everyday occurrence for an unmarried couple to spend a night together nowadays. I’ve seen couples very much younger than Teo and his girlfriend spending nights in each other’s homes and in hotels, etc.  No one seems to raise an eyebrow. Not even their parents. In my time we called that “living in sin.” Have things changed so much? I’m kinda out of touch here.

Secondly, isn’t it odd to celebrate an 11th-month anniversary? When I first read the news; I thought they were celebrating their 11th-year anniversary.  Again, call me old-fashioned but if you celebrate something as trivial as eleven months together does it or does it not say something about the state of long-term relationships these days, that making it to eleven months is really an achievement worth forking out 400 bucks a night for?

Thirdly, again call me old-fashioned but back in my time, convincing a girl with whom I’ve entered into a somewhat serious relationship for only eleven months to prance around naked with me out in the open would have been a bit of a challenge even for a man of my superlative charisma and charm. I would seriously question the moral value or the upbringing of someone like that. I would wonder why her parents even allow her to spend a night away, even though she’s of legal age and can walk around blatantly and shamelessly in her birthday suit in front of any man for all I care.

Fourthly, again call me old-fashioned but my parents have always taught me to question myself when something has gone wrong and not blame the other guy first so I would have asked if my girlfriend and I were making so much noise that two young men who were partying with 14 others would rather leave their party to become busybodies and peep at my carnal tomfoolery instead. Perhaps in our throes of passion we have inadvertently attracted them to our busy bodies Remember what happened happened at 1am in the morning.

Fifthly, again call me old-fashioned but if I were caught, the last thing I would do is to call the police, or accept anyone’s apology or talk to the press. I would be busy hiding my face because other than being old-fashioned my parents have also taught me how to feel shame. The last thing I would do is to rant about how traumatized my girlfriend was and how our “anniversary” was “marred” because we were seen naked at some hotel rooftop at 1am in the morning.