Vientiane is a sleepy hollow that’s not quite ready for the tourism industry.

I was there from March 6 to 8, roasting under the hot, scorching sun – the weather station said it was 41 degrees Celsius!

Vientiane doesn’t seem to have anything of its own; in restaurants you get French food or Thai food. So-called Laotian food is simply Thai food cooked Lao style. Nevertheless I was keen to try something local, I was told that “noodle soup is a traditional favorite and there noodle soup shops found on nearly every corner.”

Not true at all.

Even so-called French cuisine sucks, at the mosquito-infested La Caves des Chateaux, I wouldn’t even feed the steak I was served to my dog!

At Côte d’Azur operated by the fat grouchy Jean Marc Doglio, the  Jambonneau (a French name for the knuckle end of a pork leg) aux legumes “Facon Côte d’Azur” was at least edible: 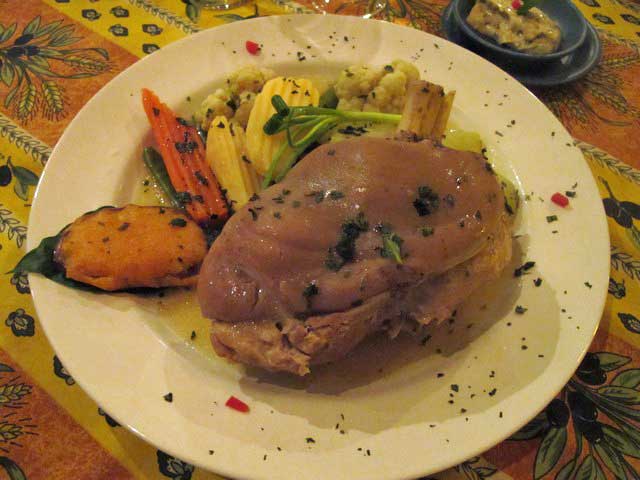 Food is cheap in Vientiane, but cheap doesn’t have to mean shitty, right?