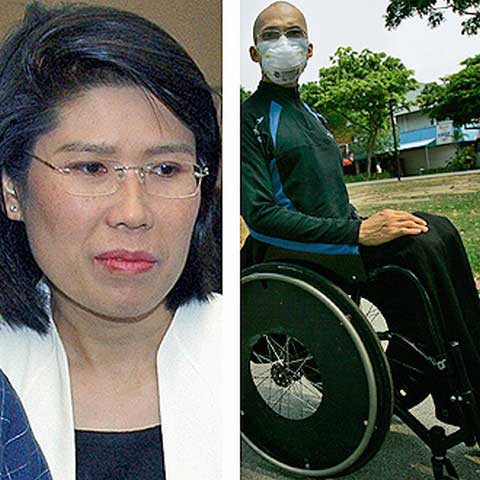 When you’ve said your goodbyes, do you take back what you have given?

Well-known paraplegic athlete William Tan is being sued for about S$400,000/- by a woman who he in turn alleged was once in an intimate relationship with him.

Stephanie Chee, 51, is claiming that she gave the sum to Tan over a six-year period from 1999 to 2005. He had supposedly approached her for financial help during this period. This is the same Chee was was sentenced on March 19 to 13 months’ jail for 10 counts of cheating. (She could have been jailed for up to seven years and fined on each charge.)

In court documents filed, the mother of three said the money was meant as loans to help with his living expenses, overseas education in Australia, and in relation to the firms he helped run, such as the Wilcare School of Health Sciences.

Wheelchair-bound Tan, 53, who is contesting her claims, said in court documents that an intimate relationship between them turned sour in 2006 and that’s why she wanted her money back.

Chee denies in court documents that they were lovers and that they had “never kissed” or had any conjugal relations.

But the court was told an ugly story that their lovemaking was so noisy, Chee’s 10-year-old daughter had to bang on the door to get them to stop.

Stung by a soured relationship, Singaporean art dealer Paramaspry Punusamy, 54, refused to return US$200,000/- worth of antiques belonging to her former lover and fellow art dealer Subhash Kapoor.

The dispute went all the way to the High Court when Kapoor, a 61-year-old American, sued her for the return of the antiques.

I repeat the question I asked at the beginning of this post:

If you have fallen out with someone, do you ask for your gifts back?

I recall an acquaintance’s ex-hubby – a cheap charlie – who asked to be compensated for the chocolate bars he bought her when they were married. What an el cheapo act!