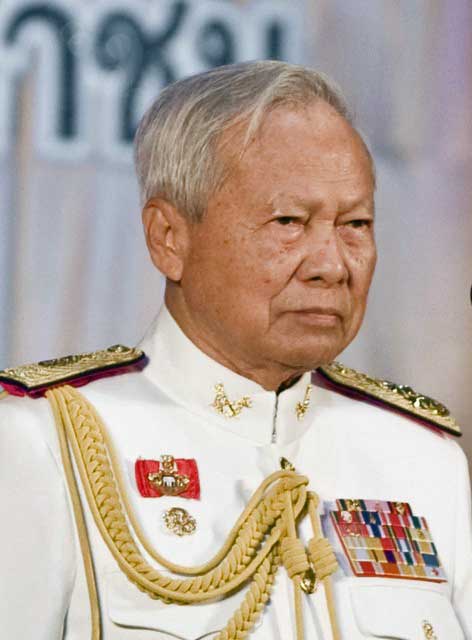 General Prem Tinsulanonda, Head of the Privy Council of the King of Thailand, one of the kingmakers.

I’ve said time and again that Thaksin was one of the best things to have happened to Thailand.

He was the first prime minister in the kingdom’s history to lead an elected government through a full four-year term in office. In February 2005, his party was re-elected by a landslide and he established Thailand’s first democratic government without coalition allies.

He also attempted to fix the drug problem in Thailand, revitalized the Thai economy and paid up the kingdom’s debt to the IMF ahead of schedule.

In the April 2006 polls he won around 16 million of the 28 million votes cast, but his enemies schemed to have this election declared invalid, the army staged a coup, and he left Thailand.

The fact of the matter is that a certain population of Thais – the kingmakers – didn’t want democracy.

So trumped-up charges were hurled at Thaksin and he was force to live in exile.

Amidst all this dirty politics, many suspect that the palace played an active role too.

They were encouraged by Bangkok residents who cheered them on.

Yup, what retards some Thais are, Yellow Shirts and Red Shirts taking turns crippling the country and destroying Thai tourism. (Last year the Yellow Shirts took over the airport and immobilized it. One of those hoodlums in charge is now the kingdom’s foreign minister.)

This time the Red Shirts also collected blood and poured them outside government house as well as the current prime minister’s residence.

This screwing around with blood is nothing new with the Thais. Last year, Yellow Shirt leader Sondhi Limthongkul placed used sanitary pads soaked with menstrual blood around a Bangkok monument as part of a black magic spell designed to vanquish Thaksin.

But drawing blood from thousands of protesters only to dump it?

What a waste of a precious resource that could have been used to save lives.

The Red Shirts lost all credibility in my eyes when they threatened to resort next to what they call “biological weapons.”

The Wall Street Journal reported that Red Shirt activists say they will start to use their “biological weapons,” or feces, if riot police try to break up the protests.

“It’s the only thing we have to repel them with if they choose to attack,” said Narong Na Phattalung, a Red Shirt protester from the northern city of Chiang Mai.

Nattawut Saikeua, a key strategist behind the Red Shirt movement, told the paper that the threat to bombard police with bags of excrement is a significant deterrent. “It seems to be working so far,” he says.

Around the periphery of the protest, small numbers of people could be seen piling up what appears to be the foul ammunition. On March 15, one speaker at the multiday rally yelled into the crowd to ask if they had their “materiel” ready. The answer: a resounding “Yes!”

Thanet Aphornsuvan, dean of the Faculty of Arts at Bangkok’s Thammasat University and head of its Southeast Asia Studies program, said the practice reflects the growing anger of rural voters who feel disenfranchised by the 2006 coup. “Human waste is purely the common people’s weapon, the enemy of the weak,” Aphornsuvan told The Wall Street Journal. “You don’t have to hire anybody or spend any money. It’s very convenient – you’re effectively carrying it with you all the time – and if you throw it about you can attract a lot of publicity.”

Government leaders have urged protesters not throw excrement, warning it could breed infections and trigger epidemics such as cholera.

These kind of dirty protests sometimes happen in other countries too, albeit rarely. US police accused protesters of hurling urine and feces during the Republican National Convention in St. Paul, Minnesota in 2008. Further back, Scythian archers began dipping their arrows in excrement around 400 BC to help cause infections.