Hit by the Aberlour a’bunadh Truck! 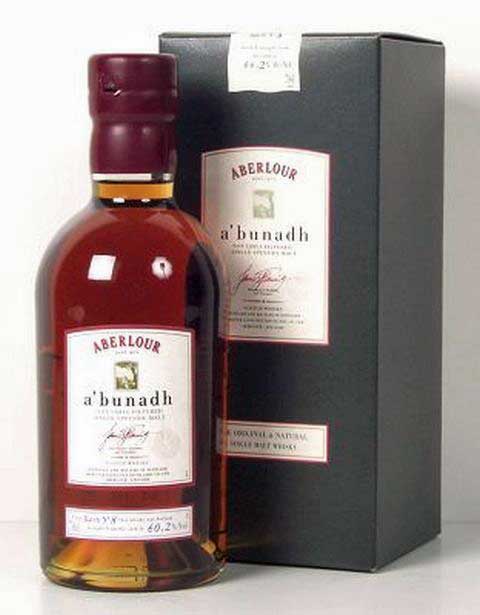 Only for the brave!

Many years ago, I became the first person to complete tasting every single type of single- malt whisky carried by the Raffles. For that “achievement” I had my picture hung on the wall at their Bar & Billiard Room for a number of years. Since then I’ve liked single-malts though I do enjoy an occasional Black Label with ginger ale. After all, the blend includes Port Dundas grain and malts from Caol Ila and Talisker. Recently my dear friend and budding actress Arvi gave me a bottle of single-malt that must have been one of the strongest I’ve ever tasted. Maybe it was because I had a drop early in the morning but it hit me like a truck! It reminded me of Glenfarclas 105 Cask Strength (60% proof) presented to me by my buddy Prof Pathma. What Arvi gave me was the Aberlour a’bunadh, a natural single cask strength malt whisky. Taken directly from specially selected sherry casks it is bottled as simply as possible without the use of modern filtering methods or the addition of water. (a’bunadh means “the origin” in Gaelic.) a’bunadh is produced in the tradition of 19th century single-malts from an era when villagers would come to the distillery to collect their dram straight from the cask, often in apothecary bottles obtained from the village chemist. The three main characteristics that distinguish Aberlour a’bunadh from the other single-malts are: Original Cask Strength means that the whisky is bottled at the strength of the cask, which in the case of the first batch of a’bunadh is 59.6% proof. The bottle presented to me by Arvi is from batch number 29. It was bottled straight from the cask at 59.9% proof. Not diluted, the whisky possesses a greater aromatic complexity. (Most malts of the old days were cask strength.) Not chill-filtered. Today most malt whiskies are chill-filtered to prevent the whisky becoming cloudy when adding water or ice. This process, which did not exist in the 19th century, removes some richness and mouth feel as well as some fruit and sherry character. Aberlour a’bunadh is a true replica of the old days’ malts. Only the best sherry butts, which previously held Spanish oloroso, have been selected by Douglas Cruickshank, Aberlour’s Distillery Director. These casks are the rarest and the most precious used for whisky maturation. Again, they were used in the old days when sherry was imported from Spain in casks which were then left empty sitting in UK ports or ships. For this reason, a’bunadh possesses an unrivaled aromatic intensity. The Aberlour a’bunadh is truly a 19th-century-style whisky matured exclusively in Spanish oak Oloroso sherry butts, then bottled at cask strength. Dark, luxurious and powerful; it is a superb after-dinner malt for real men, not wimps. Since I’m at it, here’s a shot of the Glenfarclas 105 Cask Strength (60% proof): 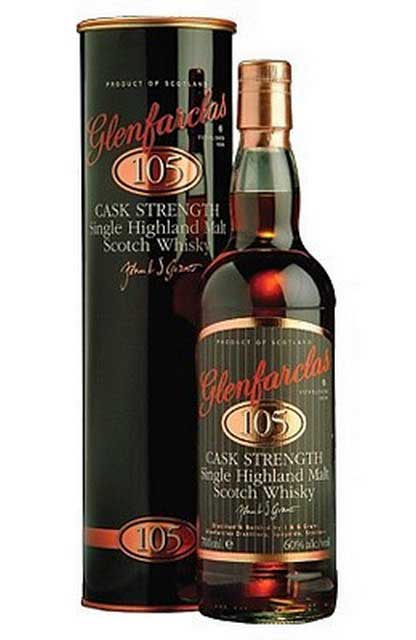