In October 2019, I learned that Yusof has now open his own place called Butcher Carey at Sri Hatamas. I ate there and it was divine! Singaporeans will get an orgasm to know that Japanese A5 wagyu is being sold at a fraction of what you would pay in Japan. In fact, other restaurateurs are rather upset with Yusof for his honest prices.

Here’s a shot of Yusof with the wagyu: 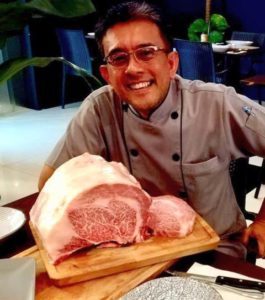 Men sneaked in at odd hours of the day so that their “disappearance” from their offices or homes will not arouse suspicion.

After they’ve satisfied themselves, and not wanting to bring any incriminating evidence back, these full blooded and macho men – some are captains of industries – pay up and tear the receipts away before rushing out of the place, making furtive glances behind their backs.

What’s driving all these otherwise serious, decent and upright men to this place?

No, this is not some brothel or sleazy karaoke joint.

This is Las Vacas.

Las Vacas is a butcher shop.

I was there again with Chai on March 22nd and Yusof Dayan Iskandar, its friendly managing director told me about the surreptitious visits of his steak-loving customers.

Thinking that red meat is not good for their husbands’ health, many wives disapprove of their hubbies eating steaks.

So this is what happened – men sneak in and indulge and then go home and pretend not to be hungry or, in some cases, go ahead and eat dinner anyway – and become even fatter still!

I can forgive these guys; the sweet, succulent steaks at Las Vacas are simply out of this world.

Chai said “This time we must have thicker, bigger steaks” so we had Yusof cut each of us a striploin that weighed at least 500 gms apiece – now that’s half a kilogram of beef per person, mind you.

Las Vacas is not a restaurant; it is a butcher shop at 23, Jalan SS5A/ 11, Kelana Jaya in Petaling Jaya, Malaysia.

Yusof told me they will open a branch at Mont Kiara soon. Mont Kiara is an area favored by expats and business should even be better!

Mont Kiara is more accessible than Kelana Jaya, let’s hope when the wives visit the butcher shop to purchase olive oil and sauces, etc they won’t bump into their husbands stuffing their faces with striploins, ribeyes and wagyus.

As for me, other than the original Morton’s in Chicago and Peter Luger in New York  – and now Las Vacas in Malaysia – no steak can satisfy me. (I recently ate twice at a place called Grill-Out! at Orchard Central – what was served was absolute disastrous. One look at the steaks and I wanted to get out. Grill-Out! my ass. Finally something worse than Botak Jones and Astons!)

The two slabs of meat Yusof cut for us: 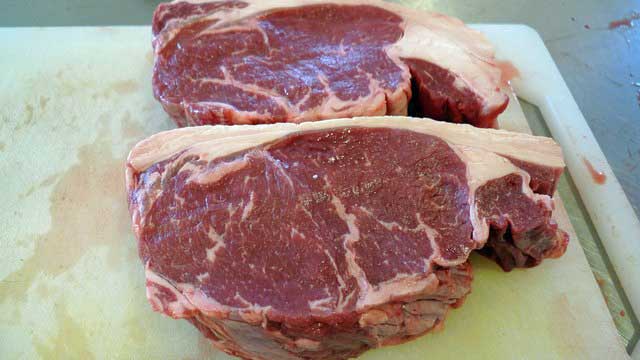 See how thick each piece was: 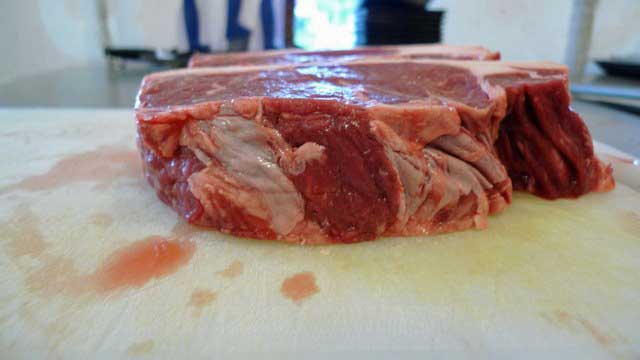 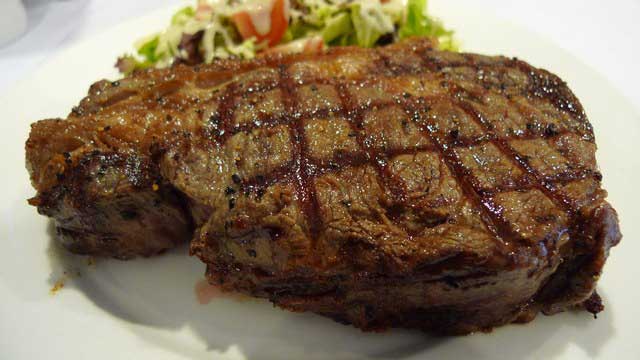