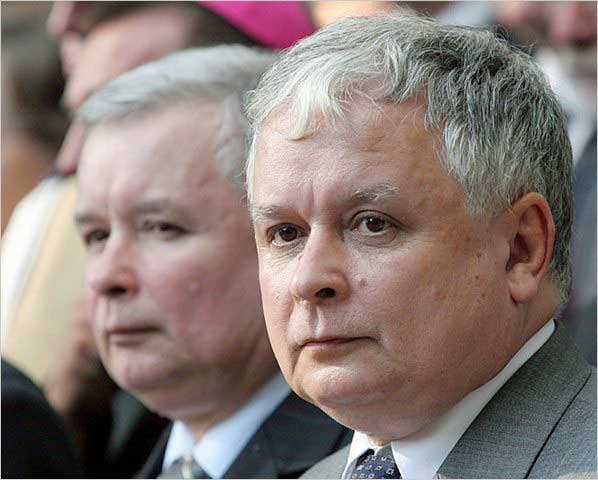 The nut case in the foreground got his comeuppance.

The evil Kaczynski twins, President Lech Kaczynski and Prime Minister Jaroslaw Kaczynski of Poland are world-class assholes – Tweedledum and Tweedledee whose overinflated egos and low physical stature make them the butt of jokes. I can never see eye to eye with jerks like them.

Human rights groups for years have been concerned by the Kaczynskis’ quarrelsome style of politics.

On April 10 the pugnacious Polish President Lech Kaczynski was killed in an air crash.

Also on board were dozens of the country’s top political and military leaders.

The Poles were stupid enough to put their president and dozens of the country’s top political and military leaders in the same plane. (In my family as a matter of “policy” we never fly together.)

But the Poles didn’t seem to have a clue about such precautions.

The plane was flying to the Katyn Forest – the site of a Soviet massacre of Polish officers in World War II. Lech Kaczynski has been going after the Russians to account for the massacre and this has gained him some popularity domestically.

But now he’s dead. Ah, there is a God in heaven after all. Lech Kaczynski got his just desserts. Too bad about the others.

And just because Poland is in mourning doesn’t necessarily mean that Lech Kaczynski was a good guy – remember the world continues to idolize Che Guevara even though he was actually a mass murderer.