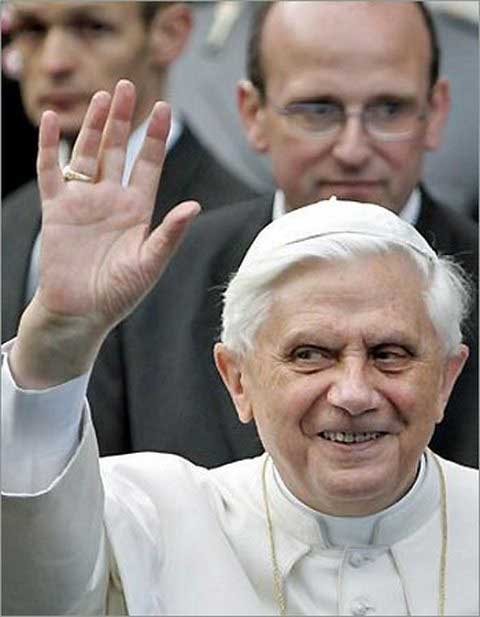 Has God's Rottweiler replaced his teeth with horns?

Molestation is a criminal act and molesters should be punished to the fullest extent of the law.

It doesn’t matter if the molester is a laborer, an executive or a priest – ALL molesters must be brought to justice. You do the crime, you do the time.

Thousands of cases of Catholic priests molesting the young have been reported thus far. New charges of molestation committed by Catholic priests continue to make the news and it is said that there are cover-ups at the highest hierarchy of the church.

Rather than acknowledging the church’s culpability, members of the church hierarchy have compared the church with the most depraved parts of the secular world, arguing that media coverage of the issue has been excessive given that abuse occurs in other institutions too.

This is flawed logic.

The Vatican also heatedly defended Pope Benedict XVI, claiming accusations that he helped cover up the actions of pedophile priests are part of an anti-Catholic “hate” campaign targeting the pope for his opposition to abortion and same-sex marriage.

In tandem with the PR offensive, the Vatican is intensifying legal efforts to protect the pope from civil lawsuits.

Vatican lawyers argue that the pope has immunity as a head of state – essentially claiming that only God holds power over him, thus making him unpunishable by any man. (This is incorrect – though the Vatican was declared to be a “state” by Benito Mussolini, it has no standing in international law. In fact authors Richard Dawkins and Christopher Hitchens are proposing to have the Pope arrested when he visits the UK in September.)

The Vatican legal team also argues that the bishops who oversaw past abusive priests weren’t actual employees of the Vatican.

I don’t want to delve into the reasons why priests molest kids; I’m sure there is no shortage of self-proclaimed experts who can come up with all kinds of  reasons for that. However, as far as I am concerned, such a discussion misses the point and is completely irrelevant. The point is that each priest guilty of such heinous acts should be brought to justice, just like any molester should be similarly brought to justice.