Qigong (or ch’i kung) is an internal Chinese meditative practice that often uses slow graceful movements and controlled breathing techniques to promote the circulation of qi within the human body, and enhance a practitioner’s overall health.

But have you heard of 99 Qigong?

Apparently there are schools – complete with gyms and grandmasters – teaching 99 Qigong, where the 99 in Chinese also sounds like “longer longer.” This branch of Qigong is supposed to be practiced in secret in many locations in China and Taiwan and if you take a peek inside you could see old men lifting weights of up to 200 kilograms with a rope tied to their scrotum. Here’s a 77 year-old guy in action: 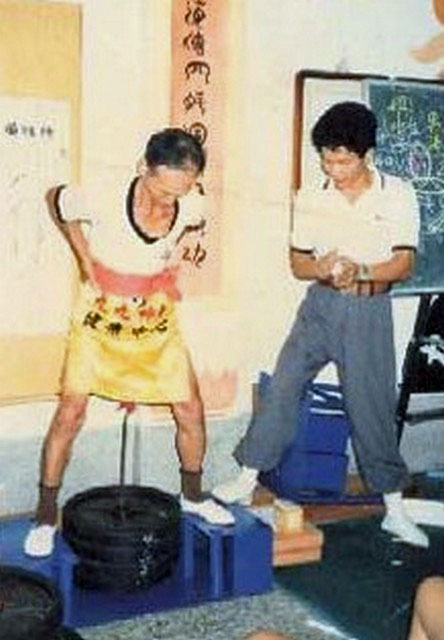 Last October, an unbelievable Qigong stunt caught the world’s attention. Three men dragged a truck loaded with 100 passengers a meter across a Taipei parking lot. While towing a meter isn’t very far (even with a 10-ton load) the size didn’t matter as much as the method. They pulled it with their genitals. That’s right – three men hauled 10 tons of truck and passengers by roping their genitals to the truck fender and pulling backwards. These men are all practitioners of 99 Qigong: 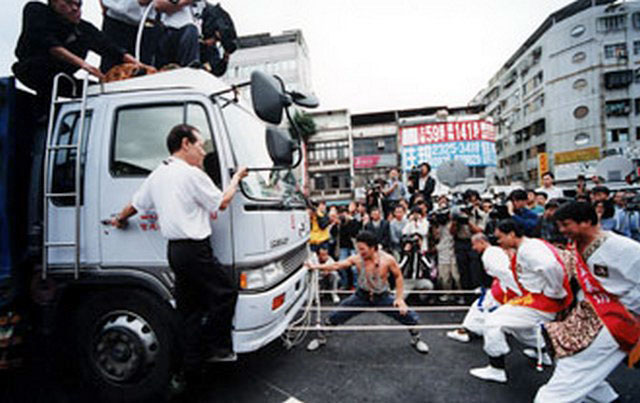 The three men were students of a renowned Taiwan master named Tu Jin-Sheng. Master Tu has staged several similar stunts and is quite famous for doing so. A year earlier, his 70-year-old student Huang Tian-Yu made the news by putting his manhood on the line. He lifted 150 kilograms (330 pounds) with his genitals. 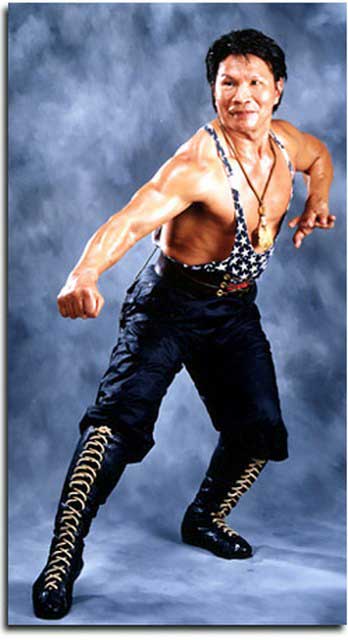 Master Tu has another extraordinary stunt in the works. He is in the process of getting clearance from the Taiwanese government to borrow a 747 jet airplane. Tu figures 20 to 24 of his top students, by strapping their penises, 6 to 8 men per wheel, can generate combined penis pulling power to move the 18,000-kilogram (39,780 pounds!) 747. That’s over a ton and a half per dick. Master Tu says that 99 Qigong also enhances one’s sexual performance.

I’ve not had the good fortune of meeting Master Tu, but when I was in Medan in early April, I was taken to Chi Kung 99 at Komplek Yang Lim Plaza, Ruko 37-38 and saw with my own eyes the astonishing, mind-blowing sight of three skinny guys using their genitals to lift weights of up to 50 kilograms and swinging the weights back and forth!

To learn this Qigong, you must join as a “member” and the fee is five million Indonesian rupiah – about 500 bucks US – per person for 60 lessons. I wonder if Medan’s women – known for their beauty – is the reason why Chi Kung 99 has set up shop there.

Of course I wasn’t allowed to take pictures, but I’ve scanned the front cover of Chi Kung 99’s brochure – pay particular attention to the picture on the lower right, it is precisely what I witnessed that day: 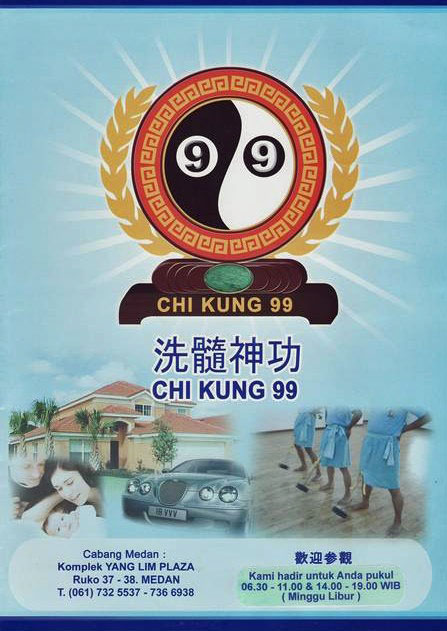