When I speak, I try to use no more than five PowerPoint charts. My ability to hold an audience’s attention and my public speaking skills are enough for me to hold court for at least an hour – without notes or visual aids.

The only reason I use PowerPoint charts is that many idiots think that if you speak without charts you have not really prepared and they are not getting their money’s worth.

Can you imagine Christ, the prophet Mohammad, Gandhi, Mao Tse Tung, etc using PowerPoint charts? No, I’m nowhere near anyone of those guys but I have what it takes to hold my own.

In rating after rating, I’ve always been rated best speaker. In my company we rate speaker effectiveness by a measurement called Net Satisfaction Index which is based on audience feedback. I am the only person in the entire company – globally –  with scores of almost 100% consistently, way way ahead of the person with the next highest rating. 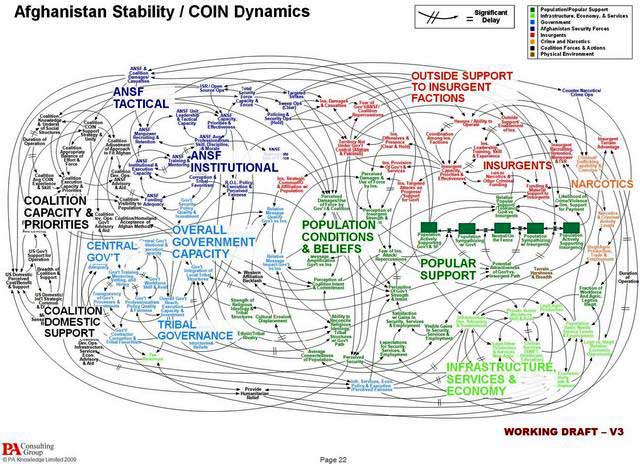 The chart above –  from the office of the US Joint Chiefs of Staff – lays out the counterinsurgency strategy to achieve three US military goals in Afghanistan:

The double lines through certain connectors on the chart represent “significant delay.”

The chart bears the logo of PA Consulting.

There are a lot of retards out there who are just poor speakers and poor presenters. They do not know how to use their voice effectively. They also lack the ability to organize their thoughts and to display them in a coherent and succinct fashion within a short period of time; hence they do complicated charts like this. A chart like this will kill the interest of any audience.

If you can’t convince them, confuse them, you see.

That seems to be the mantra of many consulting firms.

I have a colleague who loves PowerPoint.

He starts off with one slide, then with each click, the slide gets busier until at the end it looks more complicated and crowded than the chart above.

Then he goes to another slide.

He thinks he’s a genius.

Well, I think he’s a retard of the highest order.

PowerPoint has never won any deals.

Similarly PowerPoint will not win any wars.

By the way, have you heard that Singapore’s president has launched his first book – on his early life as a labor relations officer for a seafarers’ union?

The title of the S R Nathan’s inaugural book is entitled Why Am I Here.