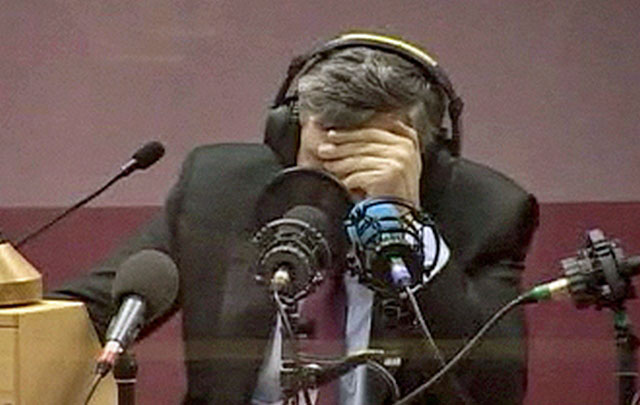 Remember that scene from Good Will Hunting when Matt Damon’s character was talking to his therapist, played by Robin Williams?

Will: You know, I was on this plane once. And I’m sittin’ there and the captain comes on and he does his whole, “We’ll be cruising at 35,000 feet,” then he puts the mike down but he forgets to turn it off. Then he turns to the copilot and goes, “You know, all I could go for right now is a fuckin’ blow job and a cup of coffee.” So the stewardess fuckin’ goes runnin’ up towards the cockpit to tell him the mike’s still on, and this guy in the  back of the plane goes, “Hey hon, don’t forget the coffee!”

Brown, apparently forgetting that he had left a television microphone pinned to his chest, made the remarks about 66-year-old Gillian Duffy as he was being driven from a public meeting, where she had needled him on immigration.

Within hours of the clip being aired, Brown was forced to interrupt his schedule to return to Mrs Duffy’s home to make a personal apology.

The encounter began mildly enough, when Brown went on a walkabout in the depressed community of Rochdale. There, directed by his minders, he met Mrs Duffy, who was on her way to buy bread.

The feisty widow raised several issues – the deficit, education, health – and then suddenly spoke about her fears about immigration. “All those Eastern Europeans… coming in, where are they flocking from?” she asked.

Brown answered courteously. “A million people come from Europe, but a million people, British people, have gone into Europe,” he explained. He then informed Mrs Duffy that it had been “very nice to meet you” before clambering into his waiting car.

Brown did well actually but the moment the door closed, he started complaining. “That was a disaster,” he told his aides. Saying that his staff “should never have put me with that woman.” He demanded: “Whose idea was that?” He then described Mrs Duffy as “just a bigoted woman.”

Reminds me of how Ronald Reagan once said jokingly that he would bomb the evil empire (referring to the Soviets) not knowing that he remark was being telecast live.

I’m sure Mrs Duffy wasn’t too.