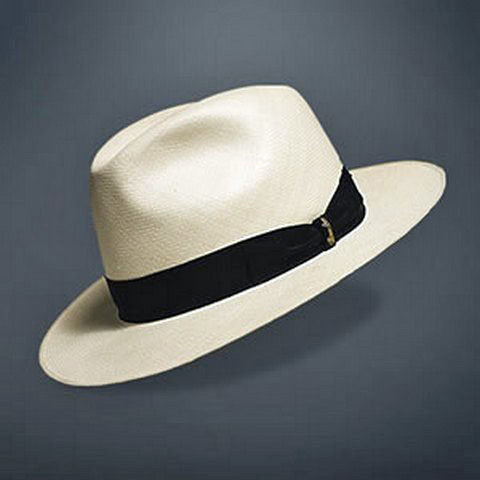 Jane March wore one in The Lover, Michael Caine wore one in the last Batman movie, The Dark Knight and now Sean Connery is seen wearing one in a Louis Vuitton ad.

I wear one too.

I’m talking about the Panama hat.

A Panama hat is not made in Panama; it is made in Ecuador using plaited leaves of the Toquilla straw plant.

They are called Panama hats because like many other 19th and early 20th century South American goods, were shipped first to the Isthmus of Panama before sailing for their destinations in Asia, the rest of the Americas, and Europe.

Glorified during the 19th century, the Panama has since been considered the prince of straw hats.

Although hats in general were worn less often beginning in the late 1960s, the Panama seems to be one of the few hats to survive the tests of time. Men can still be seen sporting a Panama in the tropics. It is, by no means, as popular as it was during the golden age of hats, but it is still surviving.

Panama hat quality is a heavily disputed subject. There are two main processes in the hat’s creation: weaving and blocking. The best way to gauge the quality of the weave is to count the number of weaves per square inch. Fewer than 100 would be considered low quality. There are many degrees of increasing quality, up to the rarest and most expensive hats, which can have as many as 1600–2000 weaves per square inch; it is not unheard of for these hats to sell for thousands of dollars apiece.

Montecristi is a grubby and unattractive pueblo like a thousand other South American coastal towns. It is there where the finest Panama hats are made. However, fewer than a dozen master weavers capable of making the finest Montecristi “superfinos” remain.

These hats are so fine, they almost defy description. At first glance the hat appears to be made from linen. These works of woven art are becoming endangered to the point of disappearing.

I bought my first Panama hat in Seoul, South Korea, of all places.

My second Panama hat is a foldable one purchased from a store in Portland, Oregon.

Yup, the Toquilla straw is so pliable that the hat can even be folded when traveling by simply rolling it up.

And as I pen this, I’m eyeing a third Panama hat.