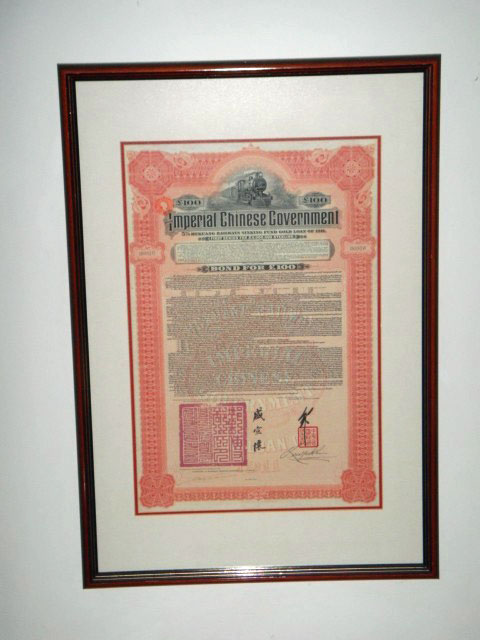 I have been collecting antique bond certificates for over 30 years now.

This is the picture of an antique bond certificate. It is a large (14”x21”) beautiful certificate printed in red. The picture doesn’t really do it justice.

It is a beautifully engraved certificate from the Imperial Chinese Government issued in 1911. This represents a 5% Hukuang Railways Sinking Fund Gold Loan for £100. This historic document was printed by the Waterlow & Sons Limited and has an ornate border around it with a vignette of a train. This item has the printed signatures of the company’s officials. It was issued by Banque De L’Indo-Chine in Paris.

The bond was issued by four banks Deutsch-Asiatische Bank, HSBC, Banque de L’Indo-Chine, The American Banks (JP Morgan & Co, Kuhn Loeb & Co, First National Bank of the City of New York and National City Bank of New York). The issue was originally negotiated by the British & Chinese Corporation (set up by HSBC and Jardines) and was for £2,000,000, however international pressure from the German, French and America governments opened the issue to the other banks and the size was increased to £6,000,000. (Participation in the loan was seen as creating new opportunities for these countries in an area previously dominated by British interests.)

How can I find out whether I have a fortune waiting to be claimed or just a piece of paper ready for the recycling bin?

It doesn’t matter to me, really.

And that’s not the reason why I collect them.

I scour the world for them and often pay through my nose for the nicer ones.

Surprisingly I came across some of the highest quality antique bond certificates I’ve ever seen at Wattay International Airport, Vientiane, recently.