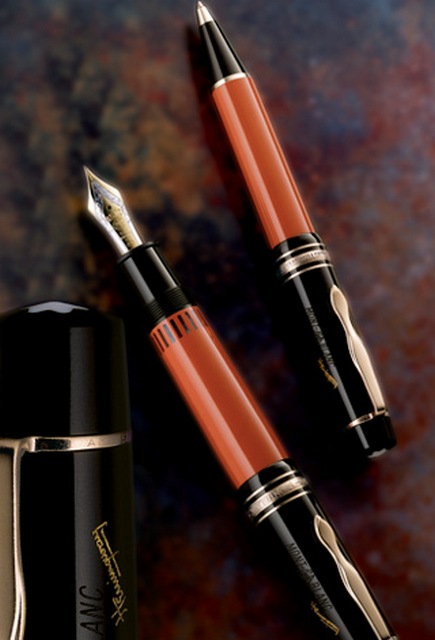 Though made only of coral red and dark brown precious resin (translation: plastic), they cost quite a bit during those days because of the gold-plated mountings and rhodium-plated 18-karat gold nib, but most of all, because of clever marketing.

The company’s rationale for the launch was that Ernest Hemingway was undoubtedly one of the greatest writers of the 20th century who still inspires discriminating literature enthusiasts all around the world.

In works such as For Whom the Bell Tolls and The Old Man and the Sea, Hemingway was remarkable for his powers of verbal expression and the denseness of his narratives.

Hemingway thus became not only a model for a whole generation of writers, but also a challenge – which most of them failed to meet, so says Montblanc.

The coral red and dark brown of the Writers Edition Hemingway is reminiscent of a Montblanc fountain pen from the 1930s – the decade in which Hemingway celebrated his earliest success.

The cap, with its gold-plated mountings and classical, gold-plated clip, bears the engraved signature of the writer. Rhodium-platings and an artistic engraving of a motif from Hemingway’s period decorate the hand-cut 18-karat gold nib.

I was suckered into buying a set.

I was younger then.

Those days you could sell me anything.

Nowadays I know how to say “No.”