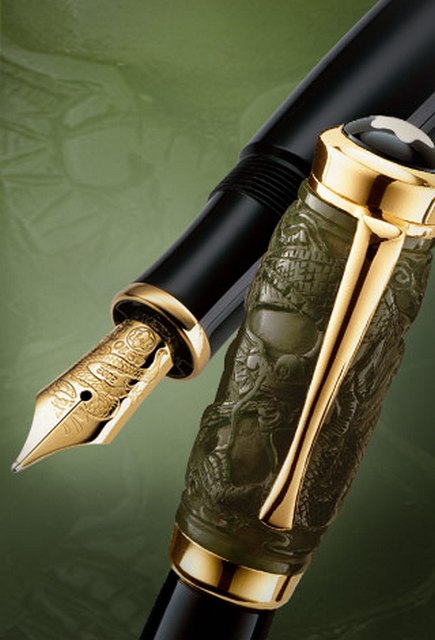 Fast forward to 2002 – I was much older then but still very much a sucker.

Here’s the rationale – according to Montblanc of course – for the brand’s launch of the jade pen:

In Europe as early as the Middle Ages, China was spoken of with reverence as a civilization rich in artistic and cultural tradition. Stories were told of the finest porcelain, wafer-thin paper, precious silk and a legendary stone that was worked by expert hands into an exotic material – jade.

The Special Theme Edition Qing Dynasty pays tribute to this great era of Chinese culture. An outstanding feature of the pen is the cap, which is made of pure jade and surrounded by a lovingly hand-engraved dragon with five claws – the Chinese symbol of happiness, strength and long life.

The 18-karat gold nib, which is decorated with a dragon, is the finishing touch to this exclusive pen from the Special Theme Edition Qing Dynasty – a combination of European craftsmanship and Chinese artistic tradition.