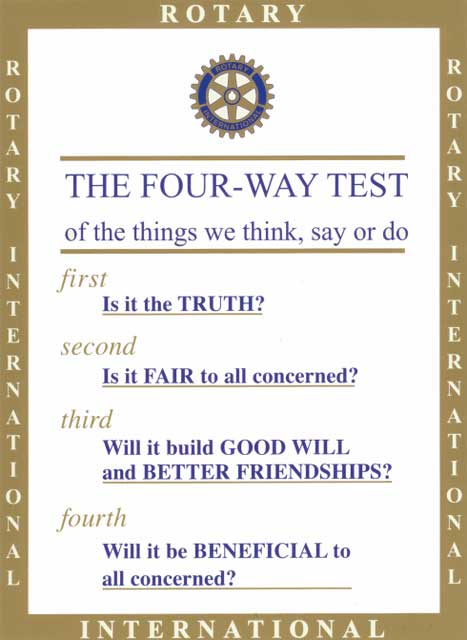 In 1932, Herbert J Taylor wrote down four questions on a small white piece of paper to serve as an “ethical yardstick” for his employees.

His simple creation has come to be known as The Four-Way Test. Revered by Rotarians, it has been translated into more than 100 languages and recited weekly at club meetings around the globe.

Herbert J Taylor, the newly appointed president of a nearly bankrupt Chicago cookware company, believing his employees were in need of an “ethical yardstick,” wrote four questions – in 20 minutes – on a small, white piece of paper:

When Taylor penned what came to be known as The Four-Way Test, the country was in the grip of the Great Depression, and there was widespread distrust of banks and corporations after the stock market crash three years earlier.

At the Club Aluminum Products Company, a new and expensive type of cookware was being sold with rapidly declining success by door-to-door salesmen using high-pressure tactics.

Although Taylor instituted additional measures, such as establishing distribution channels through retail stores and offering free trials and affordable payment plans, he came to believe that applying his test to Club’s advertising and sales methods was the key factor that led to the company’s remarkable return to profitability.

Before implementing the test as a company policy, Taylor consulted four managers – a Roman Catholic, a Christian Scientist, an Orthodox Jew, and a Presbyterian – to make sure nothing in it conflicted with “their religious or moral beliefs.”

He came to see the test as useful beyond business, writing in his autobiography, “Anyone who checks his thoughts, his words and deeds against The Four-Way Test before he expresses himself or takes action is almost certain to do the right thing.”

How was Taylor connected to the Rotary Club?

He was a member of the Chicago, Illinois USA Rotary Club when he crafted those four questions, and later became President of his Rotary club and then District Governor.

In 1944, when he was an international director of Rotary, he offered the Four Way Test to the organization, and it was adopted by Rotary for its internal and promotional use. He served as President of Rotary International from 1954-55.