The Mustache is Angry with Constantin Films 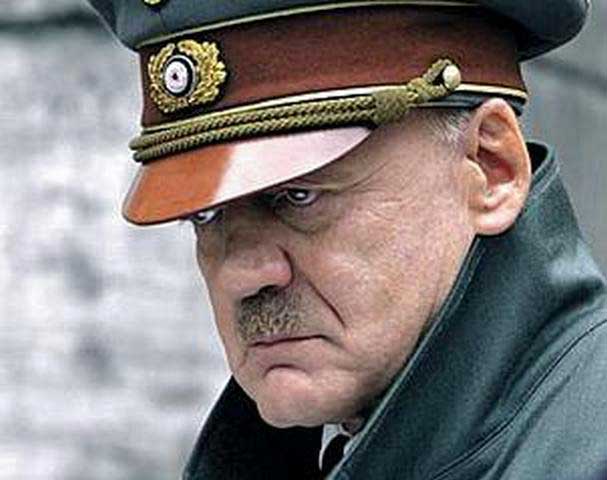 Bruno Ganz as the constipated Führer.

Hitler is pissed off.

His latest rant is against the iPad.

He’s angry at everyone and at everything.

Very angry indeed. Angry enough to order all but his most senior generals out of the room so he can vent his rage.

He is angry because Cristiano Ronaldo has been sold to Real Madrid. Or that Hillary Clinton has lost the Democratic presidential nomination. Or that Kanye West interrupted Taylor Swift at an awards show. Or because taxi surcharges in Singapore are getting out of hand.

It’s become one of the best known internet memes around, a comic construct that has spread inexorably like wild fire.

Indeed, memes on the internet don’t get any better than the Hitler one.

In the original movie, Downfall, this is the three-minute, 50-second scene in the bunker when Hitler – played by doppelganger Bruno Ganz – is told of the failure of General Felix Steiner to gather enough troops for an attack to ward off the Soviet advance on Berlin.

The angry Führer alternated between spitting vitriol and attempting to suppress his rage as he erupts before his top generals. The rest of the staff, standing in the corridor outside, listen with rapt attention while shitting in their pants.

Parody makers have taken this clip, put it through software like Movie Maker or iMovie, and added their own subtitles, synced as closely as possible to the audio.

Since then the range of topics covered has been too numerous to list.

There have been parodies made by budding Spielberg wannabes everywhere from America to God knows where.

Until Constantin Film, responsible for Downfall, has legally gotten YouTube to block these parodies on copyright grounds.

Someone should make a parody about Hilter being upset that Constantin Film is DCMAing Hitler parodies.