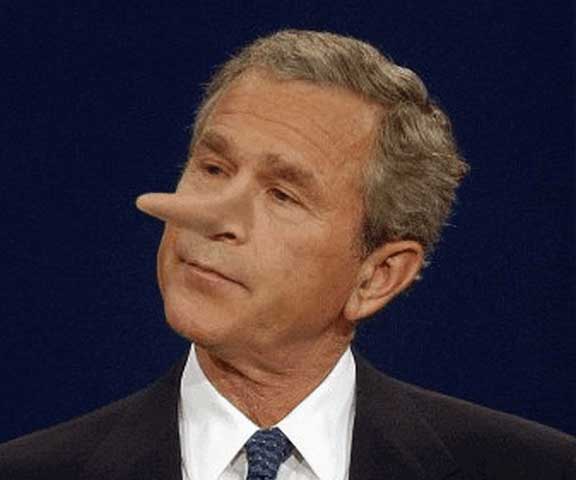 Weapons of mass destruction are all over the place.

Dorothy Rowe, an Australian psychologist, in her book, Why We Lie says that even very small white lies are motivated by a fear of damaging our idea of ourselves as people and will catch us in the end.

Some would argue that lying is surely caused as much by pragmatism as fear. And tests have shown that it doesn’t always catch up with you at all.

In a recent issue of the Harvard Business Review is an article stating that powerful people are better liars. Researchers from Columbia Business School asked bosses and staff to steal a US$100/- note and then convince someone that they hadn’t taken it – a trick that bosses could pull off far more successfully than their employees.

Oh don’t we plebeians know that!  We the unfortunate, led by the unqualified to do the unnecessary for the ungrateful have been told enough lies by the people who are above us.

Last month another study was published by psychologists at the University of Toronto showing that children who start lying by the age of two are more likely to be successful when they grow up.

Together, these two surveys seem to paint a scary picture. The cleverest are propelled to the top on a wave of lies, and once in power are compelled to lie even more. Before you know it the whole world is being run by liars.

Financial Times columnist Lucy Kellaway writes: “There is extreme lying, which is always bad. But there is also modest lying that is not bad; indeed it is absolutely essential to get through a day in the office. What is needed is more than being economical with the truth; it’s being sophisticated with it. People who thrive, have reached the further developmental stage of knowing just how far they can tell different stories to different people while still (one hopes) holding on to some core of honesty. It is knowing which lies harm and which help; understanding that truth is a bendy concept, and bending it to the best shape at the time.”

Kellaway says “Only the very stupid, the very rude and the very young never lie in this way.”

Kellaway says compulsive truth-tellers don’t last in organizations for more than five minutes. “Offices are glued together with lies,” she says, “We pretend to like people we work with. We must pretend to be satisfied with our jobs. We must pretend to think our company is better than the competition. By accepting a place in any hierarchy, you are bending yourself out of shape.”

She proclaims “I am proud of my lies. Proud of my ability to adjust behavior according to the circumstances, and hope I have passed on the gift to my children.”

She expresses concern when her 17-year-old daughter, when asked one day how many lies she’d told so far replied “none.”

“Was the answer in itself a lie,” she wonders, “Or, even worse, was she not advanced enough to have learnt how to lie?”

Then she says “But then I reflected that it was only 8am, she had just stumbled out of bed and ‘none’ was her first pronouncement of the day.”