They are not Beasts of Burden 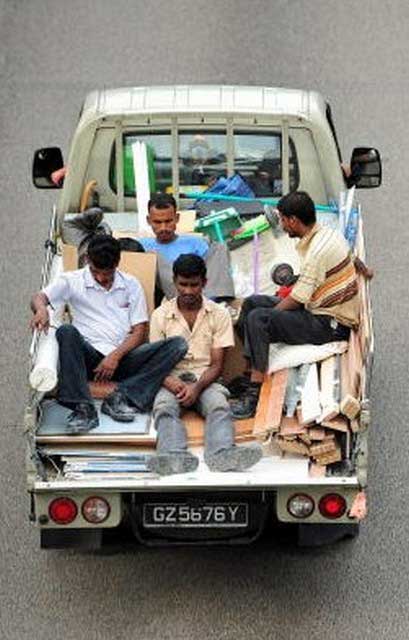 A disaster waiting to happen.

Three Chinese nationals in their 40s were killed in the morning rush hour on June 22 when the truck they were riding in skidded and tipped over just off the Pan-Island Expressway.

Twelve of their colleagues, all also male, were hurt in the accident, which took place along the slip road towards Thomson Road, just off the Changi-bound side of the PIE.

Of the three dead, two died at the scene, and the third, about four hours later, at Tan Tock Seng Hospital.

I was on my way to the office when I saw the two bodies lying on the road, covered with white plastic sheets.

A gruesome and sad sight like that early in the morning would jolt anyone up.

The vehicle was authorized to carry 13 passengers at the back but it carried 15. A day after the accident, the driver was arrested.

Due to increasing number of accidents involving such vehicles, the authorities have stepped up safety measures, such as insisting that such vehicles are fitted with higher side railings and canopies.

Employers who transport their workers on the backs of trucks are given until 2012 to comply with these stepped-up safety measures.

In the meantime, how many more will die?

In the first place, why are such vehicles even allowed to transport human beings?

It’s time we stop treating laborers like they are beasts of burden or concentration camp inmates on their way to the gas chambers.